Our main purpose for visiting Agra was The Taj Mahal. It’s on the bucket list of almost every traveller that comes to India and for us it was no different. It’s considered to be one of the Seven Wonders of the World and if you’re nearby you shouldn’t miss the chance to see it.

Our sleeper train to Agra was the coldest one so far and it also built up a nice delay of about four hours. The cold really got to us and since the guest houserooms don’t have any heating and with the weather getting cold as well, we decided to buy electric room heather. It’s not the smallest thing ever and a bit awkward to carry around on a backpacking trip, but it heats up the room very good and thus enables you to take a shower normally, without shivering like crazy while changing clothes. For the first time on our trip we really started to feel the winter and it wasn’t just the cold, the fog was also getting worse by the day. In fact it was so foggy on our second day in Agra that we couldn’t even see the Taj Mahal from our guest house rooftop restaurant, a sight that was clearly visible on our arrival. At one point it even started raining and we were a bit nervous and concerned because we heard stories when people came to Agra and were unable to see the Taj Mahal due to the very bad weather conditions. Luckily, the next day things got a bit better. 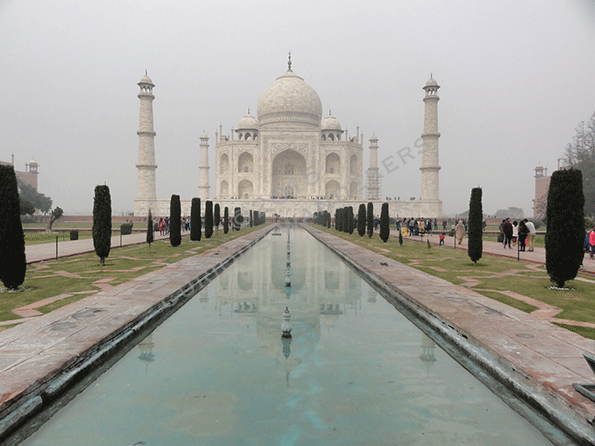 The morning was cold and there was no blue sky to be seen but the fog was slowly getting up and at around noon we headed to the Taj Mahal entrance. There we paid the highest entree fee in India and got some funny looking shoe covers before entering. Going through the arch tunnel we got to see the first glimpse. Still in the distance and through the fog the Taj Mahal showed its face. Coming through the tunnel and in to the courtyard in front of it left us amazed. The size of the building and the symmetry of it and the gardens and walls around it are clear immediately. I haven’t seen a building so symmetrical in every small detail and as we continued walking closer and closer I was trying to find a fault or two but couldn’t find none. After about an hour-long photo shoot with the rest of the people that came to see it, we went up close and inside. The white marvel with its decorations was giving the royal feel to it. Looking closer at the colourful details in the marble, we realized that they aren’t painted, but shiny stones inserted in to holes carved out the marble and together completely polished so that you can hardly tell it’s actually made like a mosaic. Even all these details were perfectly linear, symmetrical and flawless. Inside laid the copy of the tomb of the Maharaja’s wife to whom the Taj Mahal is dedicated. The original tomb is actually in the chambers beneath, out of the tourist’s sight. The inside is rather dark and not so interesting, but the whole building is undoubtedly the most perfect, symmetrical and flawless historical building that we have ever seen. It left us mesmerized and amazed. 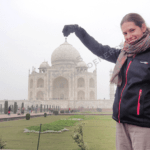 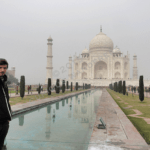 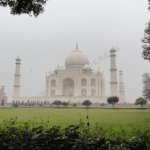 Other than visiting the Taj Mahal, we spend time in Agra roaming the market streets behind the train station. It was a reality check and felt like a slap in the face. There we saw everything that we consider to be the real India. Shops of all kind, dirty streets with cow shit, burning and not burning garbage, children playing on the street, very loud rickshaws and motorcycles rushing and honking tirelessly, beggars, touts, street food, kites flying, incense burning, street dogs, and much more was found and seen on every step of the way. At this point we’ve seen it all, almost too used to it at times, but realized it’s soon going to be too much. But with Varanasi and Delhi being our next stops, we had a bit more of this ahead of us.

We left Agra happy that the weather didn’t keep us from seeing the Taj Mahal and headed towards Varanasi. This time in a higher class compartment on the train which proved to be very warm and much more comfortable than the regular sleeper class. The only problem was that our train got delayed badly this time and we boarded it at 1:30 am instead of 20:30 pm.

One thought on “AGRA AND THE TAJ MAHAL”