Alleppey is a city on the coast, and a very famous tourist destination known for its Backwaters tours. We settled ourselves in a cozy and hippie Dream house where they offered us a nice and clean room for only 400Rs (5,20€) per night. It turned out to be a great location to go to the city center, as well as to visit the Backwaters, which was our plan for the next day. 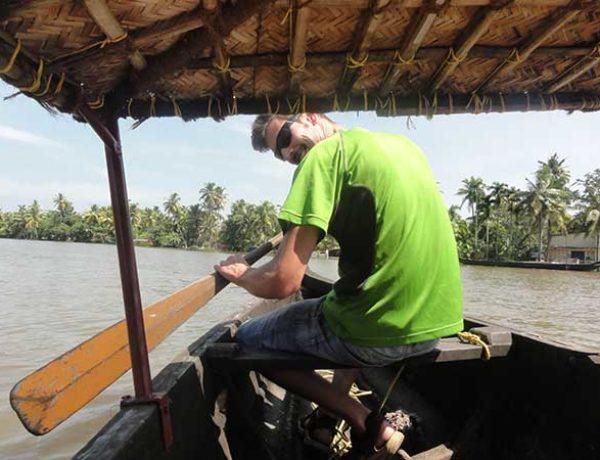 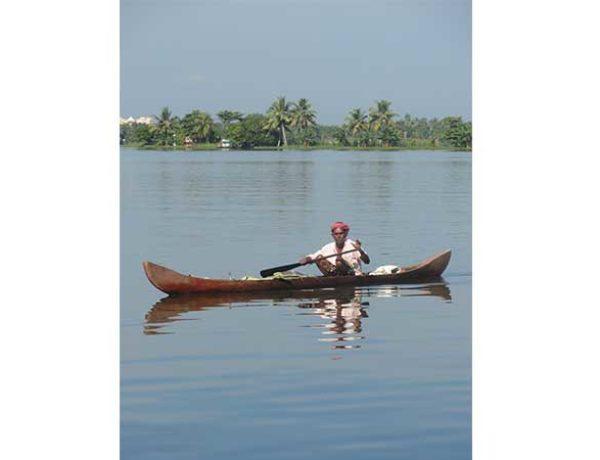 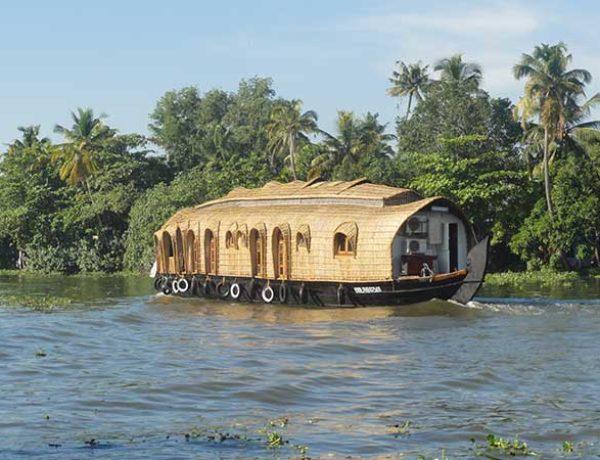 Houseboat on the Indian Backwaters, Allepey

Since I was still a little weak after four days of sickness, we decided to take a short walk to the nearby temple, and just walk down the Alleppey streets to see the rush of the typical Indian city. We also came across a taekwondo championship for children and stopped to see a match or two. The children were really nice to us and feeling very curious. They wanted to know where were we from, and even asked us for the name of our Facebook account, which is not a rare thing to happen in India nor in Sri Lanka. But the real Alleppey story began the day after, at 7 a.m., when we were taken to the ferry to start the famous trip of the Indian Backwaters.

We were a group of tourists from different parts of the world, and our journey started in a nice family home at the beginning of the canals. We were offered a typical Indian breakfast – an uthappam with two different vegetable curry sauces and a cup of black tea. Meanwhile, the boatmen where preparing the canoes, and at 9.30 a.m. we were separated in groups of four to start the trip.

The ride was slow and very relaxing, but the images we were able to catch up on our way were simply amazing. The real and authentic India was spreading in front of us with all its small simple houses surrounded by thousands of smaller and bigger canals of the Backwaters. You could see women washing their clothes in the lake, doing the dishes and even people bathing, which left us pretty much astonished as the water wasn’t clean at all! It was just amazing to see how people live in the “Venice of India”, and it was really surprising that the water level of the canals was just reaching the limit, so we couldn’t even imagine how it must be during the monsoon period.

After a couple of hours we stopped in a small shop where they offered us a coconut to refresh ourselves a bit, and after that we continued our journey ’till 2 a.m. when we returned to the same house as in the morning where a typical Indian lunch was waiting for us: white rice and different curries served on a banana leaf. We were not given any cutlery and we had to eat with our hands. An adorable eleven-year-old Sandra who, apart from being a great host, also was an amazing animator served the lunch, the same as the breakfast. She wanted to know all of our names and where we were from, and she then searched all of the countries on the map. 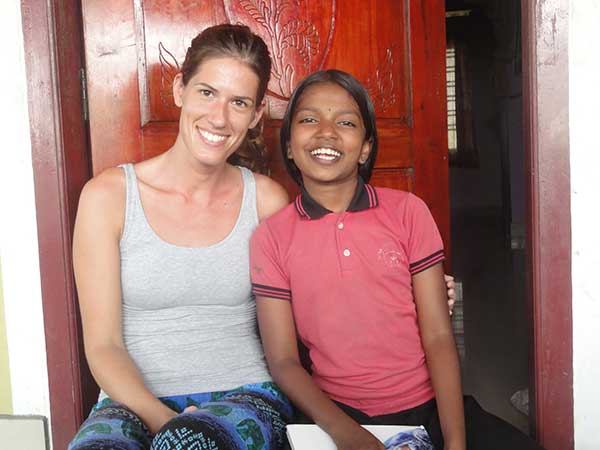 After lunch, which tasted a lot better due to Sandra’s hospitality, the boatmen took us to the ferry stop from where we got back to our guesthouse. We spent the evening in good company with our neighbors from France and packing our things before continuing our trip towards Kerala’s interior land of mountains.

Early in the morning we boarded a ferry which took us to the other side of the lake. The ride was long and a little tiring, but really worth it. We were mixed with the locals and a bunch of children going to school, and finally arrived to a quiet and nice village. We then took a public bus to the city of Kottayam, and got pretty nervous trying to find the wright bus to our next destination – Kumily. 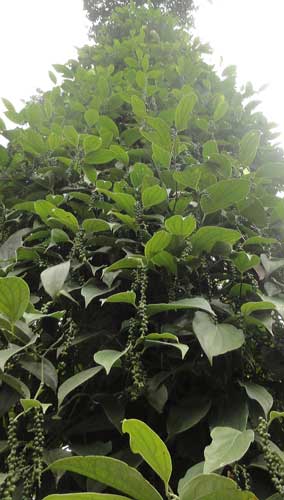 That is how pepper grows

The road to Kumily was a beautiful transition from the coast jungle to the amazing Kerala’s mountain countryside. It was a nice surprise to come across such a nice and cozy village. It is one of Kerala’s most important spice production centers, and has therefore millions of small spice shops where one can buy typical Indian spices, from cardamom, pepper, cinnamon to curry leaves.

We found a nice accommodation in the House of blue mangoes, a family guesthouse, where they also offered us some trekking tours. Unfortunately they turned out to be way too expensive for us, especially due to the pretty high entrance fee to the nearby national park, so we decided to discover the surroundings by ourselves. We asked the tourist guide to tell us whether there were any free trekking destinations, and he suggested us the Spring Valley Mountain which is just 8km away from the village.

The view from the spectacular Spring Valley Mountain hike, Kumily

He arranged a rickshaw for us, who was supposed to drive us to the mountain, wait for us to get on the top and back, drive us to one of the many spice gardens to have a guided walk through it and then take us back home. All that for only 300Rs, which seemed really cheap. Anyhow, we prepared everything for the trekking the day after: we bought some snacks, bananas and water and went to bed early to be well rested. The next morning the rickshaw driver picked us up at 8.30 and we started our ride to the mountain. The road led us through the forest and it was getting more and more steep. We were enjoying the view, but we were a little surprised because we didn’t know where the driver was supposed to drop us off to start our hike when we finally arrived to the end an were told that it would take us only 15min to get to the top of the mountain. And that is how our trekking day looked like: 30min of driving by rickshaw and 15min of “hiking” to the top of the Spring Valley Mountain. Nevertheless, we got to the top and unfortunately didn’t get much of a view due to the clouds that were spreading all around the mountains. But the second part of our day trip was much more interesting.

When we got back down to the rickshaw, he took us to the spice garden. A young lady received us and offered us a very detailed guided tour through a huge garden full of much different kind of spices. Apart from the typical Indian spices, especially pepper and cardamom, Kumily is also very known for its coffee plantations. The lady explained the whole process of making coffee and also all about the other spices that can be found in the garden. It was a really interesting excursion, and we decided to try a cup of delicious Keralan coffee in a restaurant near our home.

After the “hike”, we took a rest on the terrace of our home stay when two other guests arrived and took the room next to ours. A girl named Paula from Poland and her friend Kunal originally from India, but who has been living in Denmark for the last couple of years, turned out to be a very nice company to spend the rest of the day. We had a really nice conversation, and Kunal gave us some very useful information about travelling in India. 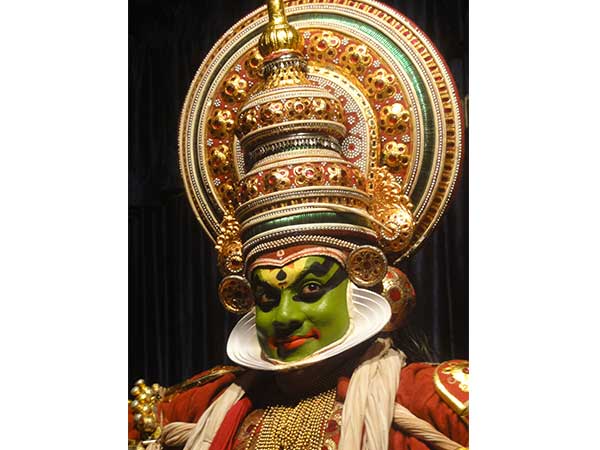 Later that evening, we went to see the Kathakali theatre together. A typical Keralan dance with very elaborated make-up and costumes, based on detailed facial gestures, body and eye movements and presented in tune with the traditional percussion music. We were amazed by the incredible ability of the dancers, to be able to represent so many different expressions without speaking a word.

We ended our day dining in some Indian restaurant, probably the only one trust worthy, although I must say I started to realize that Indian food doesn’t fit me at all. All those curry sauces full of different spices that don’t mix good together for my taste, are just too much for my taste buds and my stomach. But it seems like I’ll have to get used to it, for we have a long trip through India before us.

5 thoughts on “FROM BACKWATERS TO KUMILY”