Driving through the seemingly endless suburbs of Mumbai, looking at the infinite number of worn-down apartment buildings and scrappy shacks, we were starting to get a true feel of its actual size. We were expecting it to be big but it’s even bigger than we had imagined. The fact that we had an agreement to be hosted by a Couchsurfer calmed our nerves, as we were not prepared to search accommodation in one of the busiest cities of India.

Louella, our host, welcomed us in her lovely home in Bandra, which is a more uptown district of the city. We felt really comfortable with her right from the start, as she was friendly, welcoming and good spirited. Her apartment was also really nice and clean, a big contrast compared to the previous rooms we had in India so far. Staying there felt like a blessing. We connected with Louella very well and she gave us city maps of the places worth visiting in Mumbai. She also explained how the city trains work, where and when to get on and off one. She took us around Bandra district as well, showing us an interesting temple made of nothing else than a few thousand brass bells, something we would never be able to find on our own. Spending time with her was extremely pleasant as she is such an outgoing person, talkative, energetic and such a sweet-hart. We are happy we made a new good friend. So we asked her if we could extend our stay with her and she agreed, inviting us to spend Christmas with her, her mom and her friends. There were still a few days ’till Christmas and we spent them exploring the city. 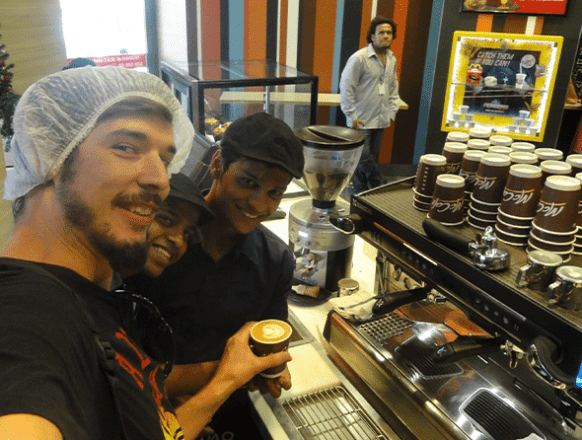 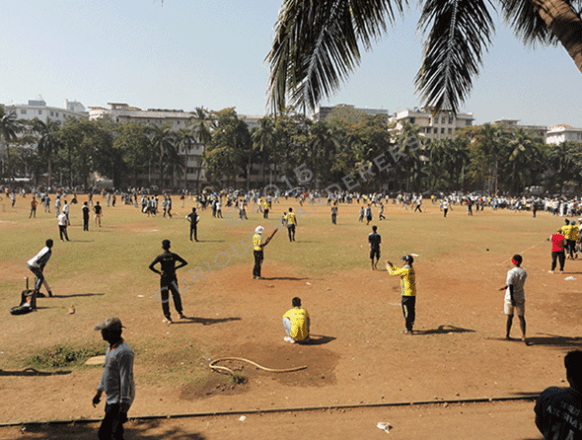 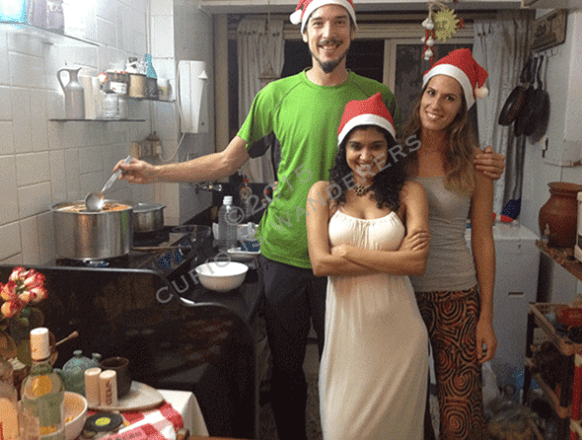 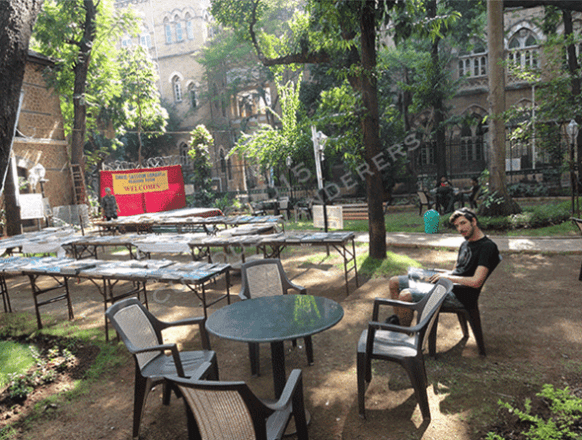 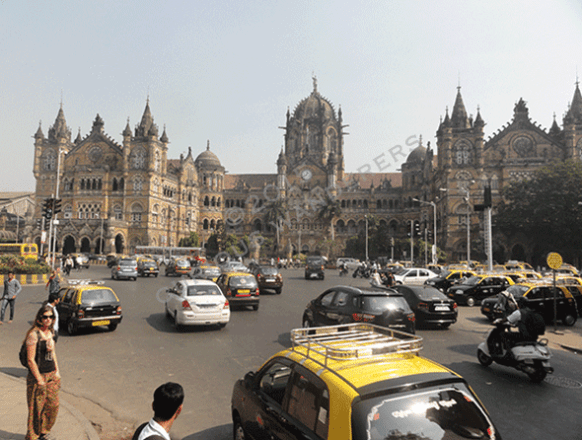 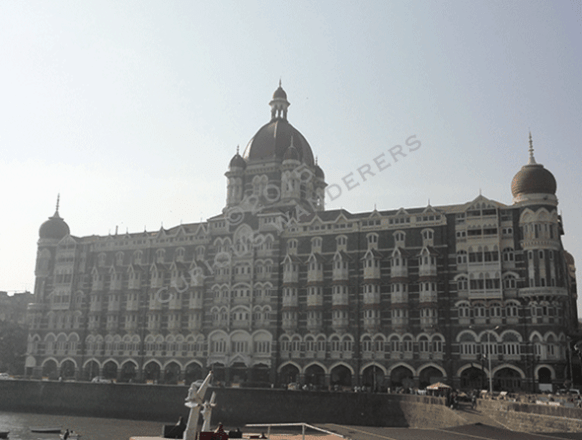 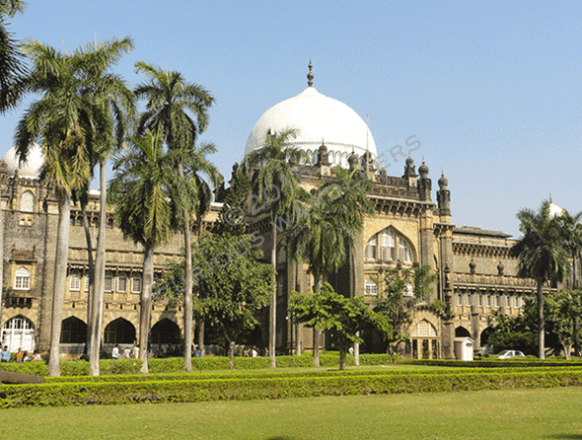 The Prince of Wales museum 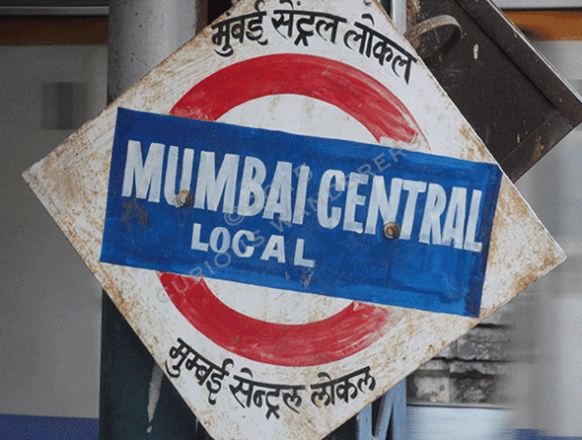 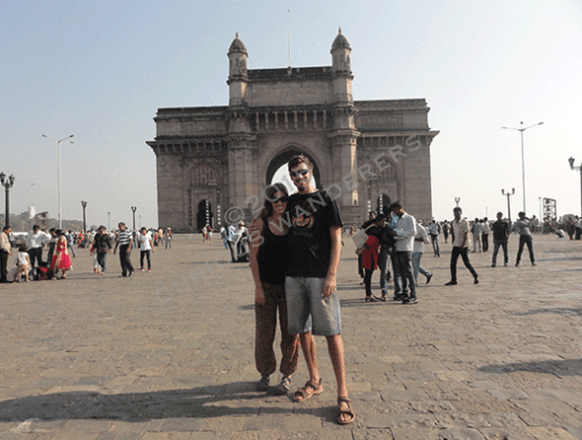 We went to Colaba, the downtown district of Mumbai, where all the major sights are located. After exiting the big train station we walked past a big park where we stumbled upon about two thousand people playing the national sport – cricket. Next to the park there was an interesting clock tower, resembling some of the buildings in London. Indeed, the British influence was really being felt here. We continued towards one of the symbols of the city – The Gateway of India. But on the way we found a few interesting spots as well. We found an old, small and cosy library, which had a lovely garden in the back where you could just sit down, grab a book and start reading. After that we went to take a peek in a small gallery across the street. Nothing special but we were feeding our curiosity, wanting to see more than just the main sights. The next thing around the corner was the famous Prince of Wales Museum inside which we didn’t go due to the costly entrance fee. We took a few photos from the outside of its beautiful white dome and headed on. Soon we found ourselves between the Gateway of India and the famous five-star Taj Hotel. Both were a sight worth seeing but it was the next place that was more interesting to us: The Leopold cafe. Today it’s a bustling cafe, always full and serving expensive western drinks and food. But what we found interesting was the story behind it. The cafe was one of the targets of a Pakistani terrorist attack in 2008 when some terrorists walked inside and opened fire from their machine guns and ended up killing over a dozen people. Amazingly, not bowing down and rejecting to be terrorised, the cafe was already open again the next day, serving what they could to the masses that came to show their respect. The cafe still has a few bullet holes in its walls and is one of the busiest joints in Mumbai today. We like the story because it shows the people’s determination, solidarity and respect for one another and the courage of not being terrorised.

The day after we went to see the famous Victoria train station, which blew us away with its European architecture, looking like a building straight out of Paris. There are countless people rushing in and out of trains here every day and it was an interesting experience just to be standing in the middle of this human anthill. The same feeling accompanied us when we were wandering in the nearby Crawford market, where you can buy anything you want if you have the time to look for it in one of the most hectic market atmospheres, yet alone have the nerves to also bargain for it. It was nice to experience all the busy vibes of Mumbai, but the city also has a nice contrast to it. Even though it’s so densely populated, it’s a very green city with lots of big palm and green trees and a decent amount of small and big parks in which you can relax from the city hustle. The same day, we met up with our Lithuanian friends, finding each other yet again. We spent the afternoon together, exchanging our Indian observations and impressions. We invited them to the Christmas party we were throwing together with our host.

And what a party it was. Louella invited a lot of friends and instructed them to bring something home-cooked. There was lots of different food and even we chipped in, making a Spanish tortilla and a fresh tomato and mozzarella salad. But the biggest hit at the party was the mulled wine that we prepared along with some cocktails done with a touch of flair. There were about 25 people at the party and since there were some musicians present we started singing together along with a guitar playing as well. It was night well spent and a totally different Christmas experience for us. Next evening, with Louella and one of her friends, we went for a walk through the Bandra streets, which were nicely illuminated by a huge variety of Christmas lights. It truly felt like Christmas but the high temperatures and the fact that we were wearing summer clothing made it a bit funny.

This was the nice side of Christmas in Mumbai, but there was another side of the story. We couldn’t help not noticing all the poor people, just sleeping on the dirty streets and pavements, probably not even realizing it were Christmas. Overall, there were plenty of sings and sights of poverty and people living in small, tight spaces far from the comfort that we were indulging. It made us realize how lucky we actually are and how desperate some people in India really are. Also while riding on the train from Bandra to other parts of Mumbai, you could see vast areas of scrappy shacks, all surrounded by trash, dirt and people washing their clothes and themselves in the sewage system. In the end it was mixed feelings about Mumbai for us, a bitter sweet after taste.

On a more personal level, I was happy I had the chance to play basketball in India again. We found a nice basketball court not far from where we were staying. There I joined a group of young Indian basketball players for a two hours game of full court basketball. It was an amazing experience for me, even better than the time I was playing in Mysore. The guys were very skilled and played at a high level. I was really impressed. They were very friendly and excited to play with a foreigner. I showed them some tricks and learned a few from them so it was a nice “cultural” exchange. I left the court totally exhausted as I wasn’t in shape to play full court for two hours, but it felt great. I took it as a Christmas present.

There was also another interesting thing that happened in Mumbai. While we were sight-seeing, we went to a Mc’Donalds to grab a western type of coffee. When ordering the coffee from the counter with the proper espresso machine, I touched it and called it “my baby”. I started explaining that I know how to operate the espresso and before I knew it I found myself behind the counter, wearing a head net and serving coffee to costumers who seemed really amused. So was I, and after about 15 minutes of having fun and making coffee, they gave me one for free and half kidding offered me a job.

Mumbai was really fun. We celebrated Christmas in a whole new different way: I was playing basketball, serving coffee and making cocktails, we managed to see a lot of interesting stuff, we’ve made a new good friend in Louella who was a real blessing, letting us use her kitchen and her apartment where we felt like home. For a moment we forgot we were actually traveling but after a week it was time to move again, this time towards Ellora and Ajanta.

One thought on “MAKING THE MOST OF MUMBAI”