Arriving to Colombo was an amazing feeling. We were tired, looking for a place to stay, buy we noticed in a moment that the locals in Sri Lanka are extremely nice. They’re not really used to see white people walking down the streets, so it was a little uncomfortable at the beginning because everybody was staring at us, but then we realized that they’re just curious. It is just amazing how everyone was smiling at us and was always open to talk to us and offer help. It is so opposite to the European culture where people are literary scared to look at somebody’s eyes, but here they would just keep eye contact ’till you notice them, and then they would say hello and smile so incredibly friendly.

After resting for a little bit we decided to have lunch in one of the Srilankan typical cafeteria called “hotels”, where we got two main dishes (chicken and rice), one small bottle of water and two delicious cardamom teas for only 570Rs (about 3,5€). Then we had a short walk through the part of the city where our hostel was located, and of course couldn’t avoid some tuk-tuk drivers who were offering us a sightseeing tour of Colombo, but fortunately the Srilankans are not annoying at all. They simply offer what they have to offer, and would always leave you alone if you say no.

The next day we spent in a house of our first Srilankan couch surfing host Vajira, and it was a really great experience. His home is located in the suburbs of Colombo and it took us some time to find it, especially because we decided to get there using public buses, and the locals, again, proved to be very kind. It was fun, indeed. Using the public transport is a great way to feel the real Colombo, and we were definitely a big attraction for them, too, as not many white people appear on buses. Besides, using public buses here is extremely cheap, one ride costs only 20Rs (0,12€) or less, depending on the destination. But be careful with your backpacks, if you carry them with you on the seat, they will charge you double!

When we arrived to Vajira’s place, we met some other couch surfers who were staying there. But meeting Vajira was a real fortune because of his great knowledge of Srilanka. He helped us planing the rest of our Srilanka trip, and we did it over some fresh papaya and milk curd. The next day he also took us to a place where we bought a local SIM card, and arranged a very good price for accommodation in the town of Unawatuna, which was our next stop.

Unawatuna is a nice city just a few km south from Galle. The bus that we took from Colombo to Galle was 420Rs for each (about 2,5€) for a 120km trip, but it would be even cheaper if we had taken the normal one instead of the AC bus. We were quite hungry when we arrived and decided to eat in some cheap cafeteria in the railway station, but it wasn’t such a good idea at all. The meal for only a 100Rs (0,60€) included rice, fish and some strange sauces, but it was far from delicious. We then took a bus straight to Unawatuna where we got the accommodation for only 2000Rs (12€) per double room with Vajira’s help, which is a half of the normal price.

Once settled in the Rock house, we called our Slovenian friend Olga who lives in Unawatuna and runs a textile shop with her husband. Later in the evening they took us for a drink to the beach, and we had a really nice conversation. Her husband offered to lend us masks and fins, and the next day we went to the Jungle beach, about 3km away from the center. It’s a nice and interesting sand beach, and if you get there early, you might enjoy it for yourself for a couple of hours, but then it fills up with Russians, which takes its charm away. And the water isn’t very clean, although Nejc did manage to see some really interesting fish when snorkeling.

Later in the evening we went for a typical Srilankan food called rotty. It’s a kind of a pancake with different fillings, and we got the chicken and the banana-coconut ones. It was a delicious meal for 400Rs (2,40€) for both, which seemed to be quite expensive for Sri Lanka. Yes, I said expensive, the prices on the coast are double! After that we were recommended to walk up the hill where a Buddhist temple is located to see the beautiful sunset. It was a nice walk, and Nejc found a fresh coconut lying in the grass next to the street, so we also had a delicious snack on our way up. 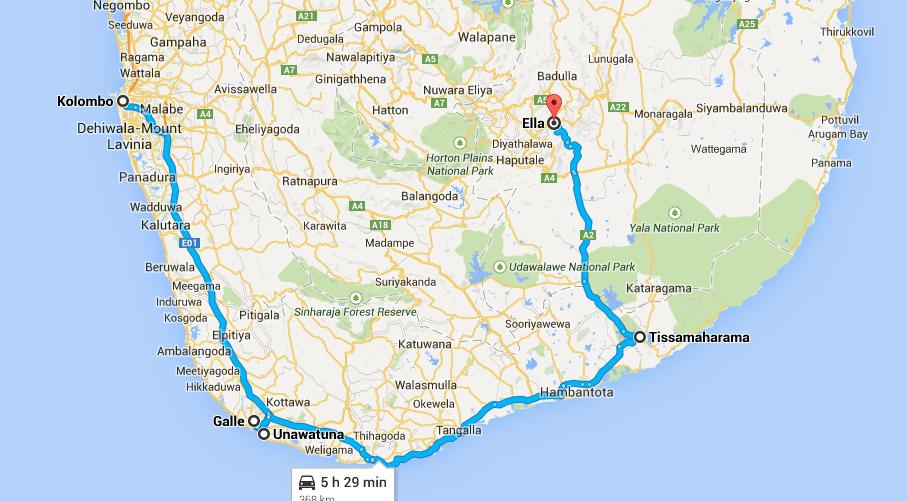 That is mostly what we did on the coast. The next day we took a bus from Galle to Tissamaharama without booking any hostel before head, and there was a nice guy offering us a nice stay at La Safari Inn guesthouse for 1500Rs (9€) per double room. It is located about 1km from the bus station, so he also offered to take us there. In the evening we met some Germans, and later we were all sitting at the same table, the Germans, the employees of the hostel and us, having a beer and exchanging experience of our travels in Sri Lanka. It was nice to be in a friendly company with the locals. But we only stayed in Tissa for one night, breaking our travel to Ella. The town is very near to the Yala national park, where some typical wild animals such as leopards and elephants live, but the entrance is pretty expensive (36€/person) and we decided to skip it.

Today we were travelling all day, and a couple of hours ago we arrived to Ella, a nice village in the middle of the Srilankan mountains where we are planning to do some hiking. We are accommodated in a really nice house for 1500Rs (9€) per double room. It’s been a rainy evening, so we don’t have much to do outside, and we decided to rest a bit and post some photos… Until I managed to delete them all.

2 thoughts on “COLOMBO TO UNAWATUNA”