After experiencing the geo-thermal side of New Zealand, it felt appropriate to climb a volcano. We decided to do the Tongaririo Alpine Crossing, which is an 8 hour trek that leads you over a 2000m high saddle between two volcanoes, Tongariro and Mt Ngauruhoe, otherwise known as Mt Doom from Peter Jakson’s The Lord of the Rings movie trilogy.

Mt Ngauruhoe, also known as Mt Doom from The Lord of the Rings

We were extremely lucky with the good weather that can really make or break your day when doing the trek. It was cold in the early morning when we started, but the sky was clear. We reached the saddle after about 2 hours of steep climbing on a well-maintained trail in the middle of volcanic rocks. The view on Mt Doom was amazing and scenes from The Lord of the Rings were rolling in my mind as I imagined Frodo and Sam carrying the ring of power in to the lands of Mordor and up and in to Mt Doom to the place of its destruction. 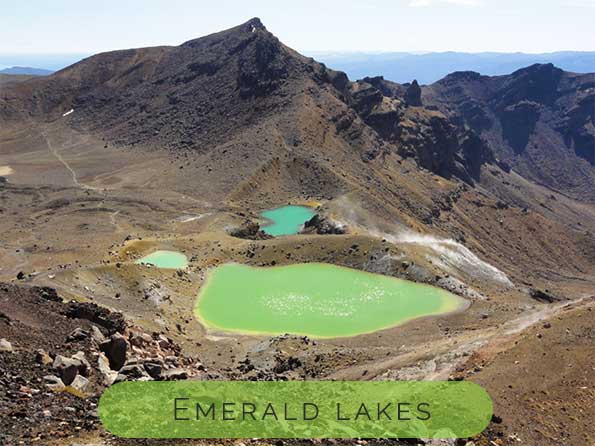 Climbing over the highest point of the trek, about an hour later, our view widened. Not only were we able to see the vast volcanic landscape of the Tongariro national park, but we also got our first glimpse of the three surreal Emerald lakes and the stunning silver Blue Lake. With a sight like that before our eyes it was hard to look down under our feet while descending down the steep and tricky slope of loose rock and gravel. But we made it down safe and gazed upon the Emerald lakes up close, sitting down to rest our legs and refuel our bodies.

While resting, we couldn’t help not noticing how many people were doing the trek on that same say. About a thousand, we’ve heard from a guide later. And with so many people on the trek, it was fun to see how different they were in the way they dressed and equipped themselves for the hard alpine trek. Many were well prepared and had enough water supply and quality gear, but too many were casually dressed, carrying nothing but their cameras, i-phones and selfie sticks. A lot of women were actually carrying more make-up on their face then water to drink for the 8-hour trek. Luckily for the ill prepared, the weather conditions were very favorable; otherwise it wouldn’t have been so funny.

After passing all the lakes, we had a slow and steady decent down the mountain on another good trail, overlooking beautiful landscape and lake Taupo. Soon we concluded our day of trekking and said goodbye to the Tongariro and its wonders. Our next destination was Wellington.

We arrived to the otherwise windy capital on a very rainy day. Obviously our luck with the weather had to run out eventually. Given the bad weather, our impression of the city was not all that great, but it was a person that made our good memory of Wellington. It was our new couchsurfing host and also our new friend, Mauricio, an Argentinian living in New Zealand and an extremely nice, friendly and welcoming person. We spent two nights at his place and spent some good quality time over a couple of dinners with him.

We were less impressed with the city center of Wellington, but we really enjoyed the Te Papa museum. We are generally not a museum type of people, but since it was free and recommended to us by Mauricio, we went to check it out. Indeed it was well worth visiting and it left a good impression on us as it was a very interactive type of museum where you need to touch, feel, hear and observe all sorts of different things. The various exhibitions of New Zealand’s wildlife, earthquake, cultural and general history were very interesting and informative. 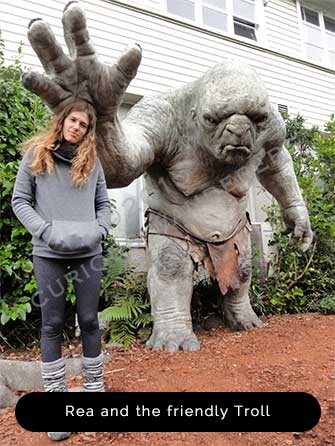 Another place we visited in Wellington was the Weta Cave. A studio or actually a workshop where they make all sorts of props, masks and costumes used in movies. They participated in over 30 different films, but most notably in the trilogies of The Lord of the Rings and The Hobbit. The guided tour of the place was intriguing and it explained and gave us a better idea of how such movies are made and how much work is behind in just couple of seconds of screen time. We saw models, sculptures, costumes, life sized weapons and their fake prop versions, the workshop itself and a lot of details used in The Lord of the Rings movies that made my mind crazy with rolling the scenes in my head. Even Rea got excited and maybe now she’ll be willing to give The Lord of the Rings a chance and watch it with me. Maybe.

After our lovely two-day stay at Mauricio’s, our time on the North Island came to an end for now as we boarded the morning ferry to Nelson. Happy that we had an awesome time on the north, we where very excited about finally reaching the south island. A place, for which many have told us, is even more amazing.

One thought on “FROM TONGARIRO CROSSING TO WELLINGTON”