Before coming to Delhi, a big chunk of India was already behind us, but we where still expecting the worst as many people that we’ve met didn’t speak fondly about the nation’s capital. Mostly everybody hated their visit to Delhi and told us that it’s too loud, dirty and even worth skipping. In the end, we proved them wrong as we enjoyed our stay there and we were even feeling bad that we only stayed for four days.

We reached Delhi by train and decided to go to the Main Bazaar road, where the cheap hotels are, using the metro. The Delhi Metro was our first big pleasant surprise as it is one of the cleanest, most punctual and organised that we’ve ever seen. It’s up to standard and even better than for instance the Paris Metro, London Underground or Berlin Ü-Bahn. The only thing that is time consuming is the security checks. Each time you want to use the metro, you have to wait in a big line, especially on bigger stations, get searched and patted down and your bags get scanned as well. All of this is due to security reasons to prevent a possible terrorist attack. But it is super cheap, well connected and we didn’t even use a single rickshaw throughout our stay. 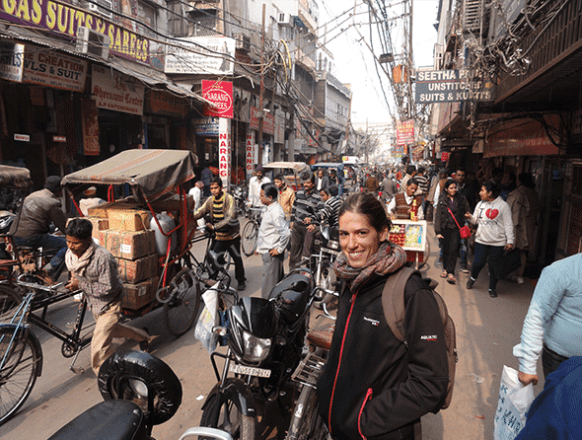 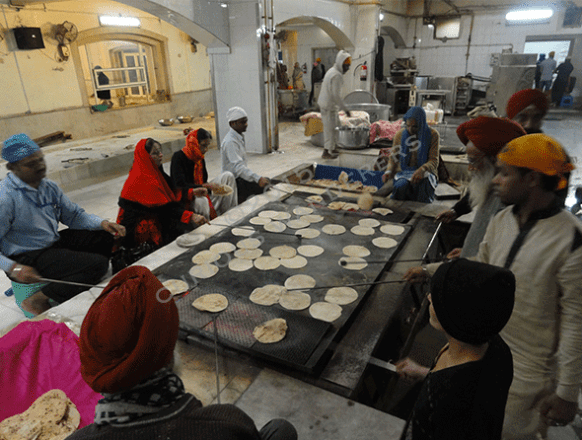 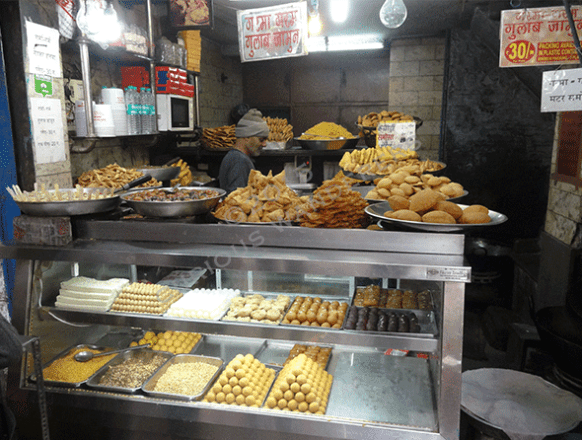 After settling in our hotel in the Pharaganj area near the Main Bazaar road, we headed off to explore the surroundings. Rea was very excited to see so many different shops scattered around the Main Bazaar road and she just had to spend some time looking at the various woollen and other products. We didn’t end up buying any of them but she really enjoyed just sniffing around. Our senses were aroused as there was so much going on around us, but we just went with the flow and actually enjoyed the whole chaotic hustle and bustle. Our walk that day also brought us to Connaught Place, which is where the high end stores and restaurants are located. There was definitely a more up town feel at this place but the streets around where still full of food stands where we took a few minutes off and had some boiled corn as a snack. On the way back to our hotel, we stopped at one of the shops selling backpacks. Rea’s old backpack was starting to tear and we decided to buy a new one for her. We didn’t pay much for a good, but probably fake, North Face backpack. The quality of it is still undetermined but we are hoping for the best and that it lasts.

The following day, we took the metro and found our selves on the streets of Old Delhi. As all Indian streets, these were dirty as well, but not as much as we expected. We were wandering around Chandi Cwok and the back alleys of Old Delhi, where we were intentionally getting lost. Once more, there were various shops, stacked one next to another and a few old havelis, that seemed to be abandoned, in between. We made it to the Red Fort walls but only checked it out from the outside. Instead we visited the largest mosque in all of India, the Jama Masjid. It’s a very nice building, very symmetrical and big, but the men at the entrance were very rude to us, which gave us a bad overall impression there. We left it quite quickly and went walking through the old streets once more. 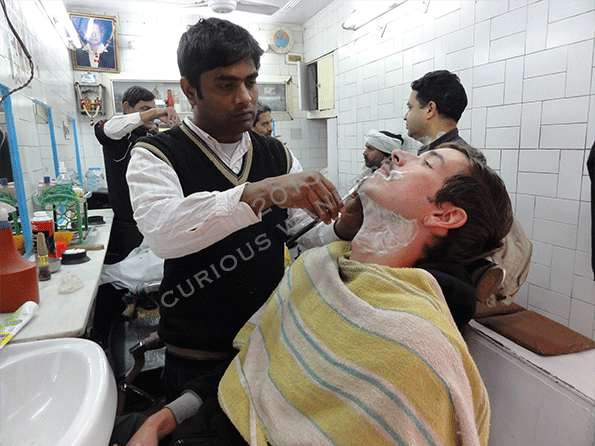 A visit to the Indian street barber

While passing a street barber shop, the man running the place waved his hand and since getting a shave at a street parlour was on my bucket list, we stepped closer and I sat on the chair. I asked for an Indian style shave, which means getting the closest shave that you can get, shaving off the beard, leaving only the moustache to be trimmed a little bit. The whole process took about half an hour and half a dozen jokes from the locals with Rea smiling in the back. The new look I got was very Indian and very silly at the same time, but one more thing on the bucket list was checked.

In Delhi, we also visited the Akshardham temple, the biggest Hindu temple in the world. It’s actually a very big complex, new and modern. Built in 2005 and representing the whole history of Hindu India, it’s beautiful but almost too pretty and looks a little bit like Disneyland. Sadly we weren’t allowed to make a single photo and the security check at the entrance was at international airport standard. But it was nice to experience a modern temple as well. It was absolutely beautiful, with its countless sandstone and white marble detailed carvings, made by 11.000 pairs of volunteer hands. 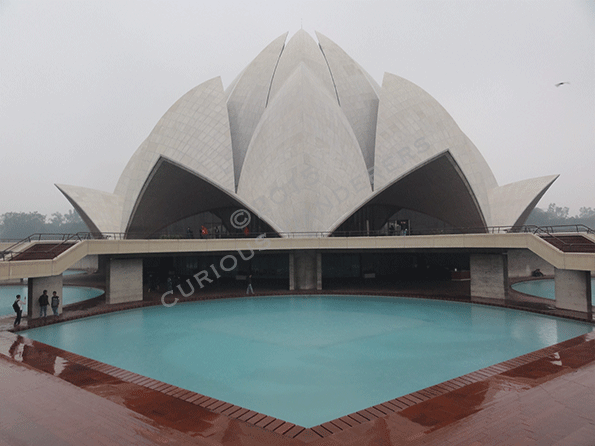 Similarly modern and new is the Lotus temple or Bahai House of Worship, which we also visited. At the time that we were there, it was pouring rain and cold. Nonetheless, we had to take our shoes off and walk the ice-cold marble barefoot to reach the entrance of this beautiful, nine sided, Lotus like temple. It’s a place that welcomes all religions and accepts everybody. Its spacious and silent hall is meant for prayer and meditation but no other loud ceremonies are allowed. It was very interesting to experience both of this places and be able to see how India is still more than keeping in touch with religion in the modern world and how the future here may look like.

On our last day in Delhi, we took the metro to the other part of town and walked back in a big loop. First, we entered the Lodi gardens, a very nice and peaceful park, full of trees, green lawns, ponds and ancient tombs. It was a lovely escape from all the city noise. We continued walking the amazingly clean and wide streets of New Delhi and came to the Indian Gate. It’s an Indian version of the ArcDU triumph but to our bad luck it was closed down and surrounded with military guards. That was because India was celebrating its Republic day and hosting president Obama for the big event which was to take place here in a couple of days. The surroundings were on lockdown so that preparations and security measures could be carried out. We didn’t bother too much and went to visit the nearby Crafts museum. The museum was small but filled with all kinds of antique craftsmen products such as clay and metal bowls, tons of ancient fabrics, woodcarvings, all kinds of different statues and other similar things. There was also a Museum shop, which was a real poison, selling al kinds of shawls and miniature statues. Probably the most beautiful EMBROIDERED shawl with millions of details costs over 1000€. We spent about an hour there before heading towards the centre again. The last big thing we visited was the big Sikh Temple. 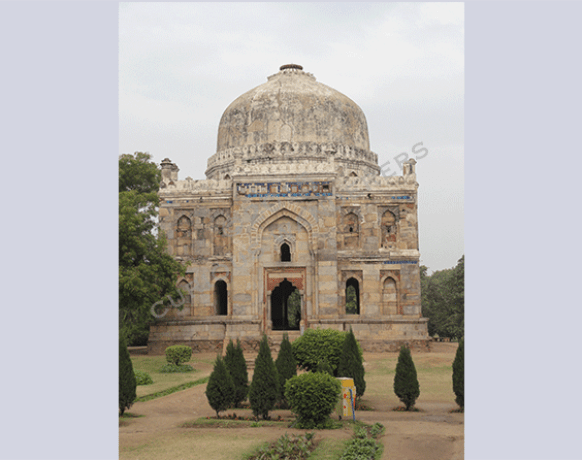 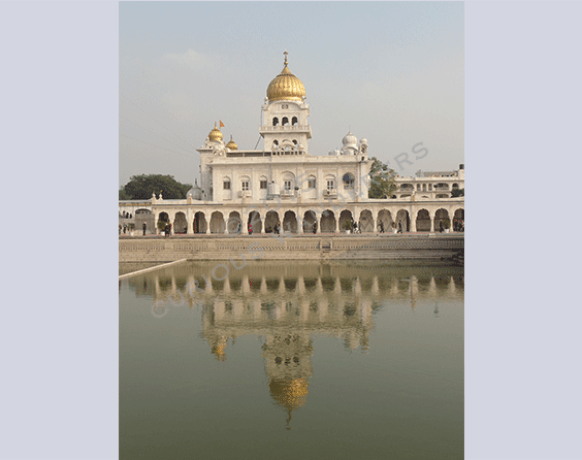 We didn’t know anything about the Sikh religion before coming there, but a kind man approached us an offered to explain. We thought it was a branch of either Hindu or Islam, but in fact it’s a religion like no other. One of the youngest religions, it doesn’t praise God directly but rather the Holy book which contains the teachings of the Ten Holy Gurus. A replica of the book is worshiped in every temple, with the original book is stored in the Golden Sikh Temple in Amritsar, Punjab. The Delhi Sikh Temple is actually an old haveli palace so it was hard for us to imagine what a holy building of the Sikhs should really look like. The thing we learned and love most about this religion is that everybody is welcome there. Not only that, but they also feed over 10,000 people a day, for free. Next to the temple, there is a huge dining room with an even bigger kitchen. The food they cook and serve is basic but tasty and the amounts are enormous. In the kitchen, there were about 20 chapattis being made every minute and gigantic pots of curries where boiling all around. We had a late lunch there, had a walk through th3 kitchen and left happy that we’ve learnt something new.

Our Delhi experience was coming to an end. We saw plenty, but much, much more still left to be seen. It’s a good reason to come back one day, to the city where not a lot of foreigners really enjoy. We think the reason why people told us they didn’t like Delhi is because they generally fly in to Delhi. To experience your Indian culture shock in the state’s capital can be overwhelming, but if you get to know a bit of India before hand, then you can really enjoy Delhi like we did. It will definitely be one of our stops when we eventually come back to India, but for this trip there is no turning back. Our next stop was further up north, Rishikesh.