The trip from Hatton to Kandy was quite long, or at least it seemed so after an awesome, but tiring hike to Adam’s peak. We were looking forward to arrive to our new destination, knowing that we’ll have the opportunity to spend another few days with a local. Roshan was our second host who agreed to give us a free “couch” for three nights, but when we arrived to Kandy we found out that our host actually lives about an hour away from the city. But it was absolutely worth it, because Roshan is one of the best hosts you could ever imagine.

At the beginning, we were a little surprised with the place we were staying at. It is actually a school he rents to give English lessons that has another room where Couch surfers stay. It was also quite interesting to discover that the bathroom doesn’t have a sink, but the most amazing moment of all was finding out that we were sharing the room with somebody, or should we say something else: a small bat searching for some company.

In spite of all that, we were happy to have a bed and a place to wash our clothes. We spent the evening with Roshan who told us a little about himself. He also offered us to take us to the Elephant village, the oldest elephant orphanage in Sri Lanka. He described it as a really nice place, so we decided to visit it. It was also the first time that we paid an entrance fee for an attraction, which cost 2500Rs per person (18€). We were pretty excited about the experience we were about to share, as neither of us had never had the opportunity to be that close to such a big animal before and feel it’s energy. But as soon as we arrived to there we immediately started to perceive the feeling of sadness from those precious animals in chains. Nevertheless, we decided to enter. 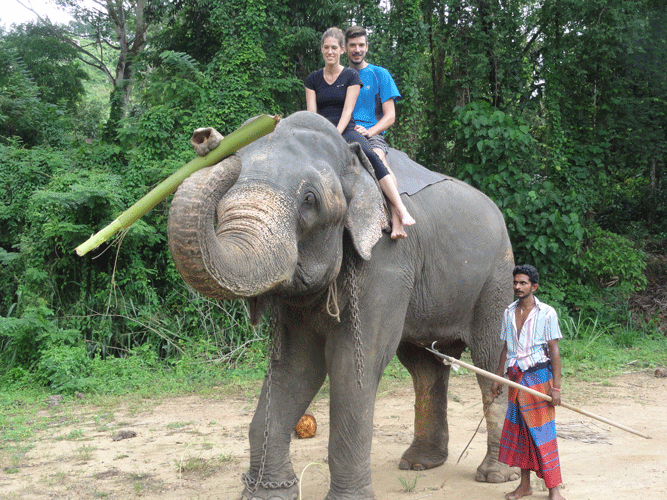 We both rode one of the elephants to observe how they live in a small, limited territory and are trained to do the same steps every day. The elephant took us to a small river that was his home, showered us with his trunk and left us completely drenched. He then dropped us off his back and got prepared to be washed and brushed. He laid in the river and we started to water him and scrub with a coconut brush. After a few minutes we rode him again and he took us to the same place where he picked us up at the beginning. On our way back, the timer was poking him with the spear to pose for a photo, which was, again, not a pleasant scene to see. Anyhow, this was the end of our visit, and although it was nice to be that near to such a beautiful and powerful animal, we could see that even powerful animals loose their power when trapped in such a small territory without having the opportunity to fulfill their potentials. This is, unfortunately, the overall sad feeling we carry within after our experience in the Elephant village.

After visiting the elephants, Roshan took us to his working place. He is a doctor of Ayurveda and he works in a nice Ayurveda center, surrounded by a spice garden where we were learned about all the spices that can be found there. The guide also explained about all the different crèmes, oils and perfumes, containing all those natural ingredients, and it was really hard to resist not buying anything from there.

Rosah then took us to the place where were staying and told us that there was another Slovenian couple that asked him to stay there the same night. We all spent a really pleasant evening together, and Roshan surprised us with bringing an authentic egg rotti from a local “hotel” of the village.

The next day we went to Kandy, probably the most modern city of Sri Lanka. We walked up the hill to visit the big white Buddha statue, and then descended back to the center to see the Temple of the Buddha’s tooth. The legend goes that the tooth was stolen during Buddha’s cremation and brought to Sri Lanka where it has resided ever since. But no one really knows whether the legend tells the truth or not as it is not possible to see the tooth itself. However, the temple was really nice, and after spending a couple of hours in there we went to see the Srilankan national dance, which was just behind it. A mix of feelings was the result after the show. In spite of all the amazing things the dancers did on the stage, from doing somersaults to swallowing fire flames, they were quite clumsy, out of synch and some of them seemed to be very bored during the show. 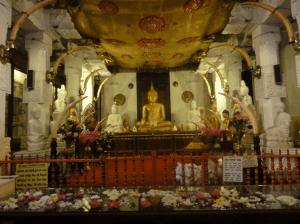 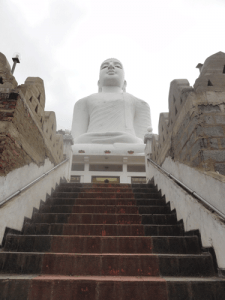 Once the dance finished we went back “home” to Mawanella where Roshan was waiting for Rea to give her authentic Ayurveda massage. He took me to the center where he works and it was the most complete massage I’ve ever experienced. It lasted 75min, and Roshan didn’t charge me anything. It was up to me to estimate the value of something that doesn’t have a price and tip him. My clothes still have the smell of all of the jasmine and sandal oils he applied to my skin and hair, and it is definitely something I’ll try to repeat when the opportunity comes again.

The next day we said good-bye to our new friend and headed towards the central part of the country, Dambulla. We immediately got a really nice accommodation about 2km from the city center. It was a clean, cozy room, and the owner was a real gentleman. He gave some bottles of water for free, and brought us some plates and cutlery when we later appeared with our dinner, which was, again, fresh curd, pineapple and two delicious avocados.

Once settled down in our new home, we walked to the famous Golden temple, and ascended up the hill to the Cave temple. We decided not to pay an entrance fee, but it was certainly a nice walk. From the top we could see Sigiriya rock, which was our next destination.

After having some typical Srilankan snacks and sweets for breakfast the next morning, we took the bus that led us to Sigiriya. Sigiriya rock, also called the Lion’s rock, is a famous rock that used to be a fortress, but there is actually no exact explanation of what it really was. We knew that the entrance fee for climbing the rock is tremendously high (3900Rs = 24€ per person), so we decided to get another perspective of the rock. There is another hill with the temple about 2km from Sigiriya called Pidurangala, where it only costs 300Rs to get up. It is a really nice and spiritual place with a small, 1500-year-old temple at the bottom of the hill. We entered and observed for a while the locals that were just having the religious ceremony. After that we started our hike up to the peak, but a young boy who wanted to be our guide just wouldn’t leave us alone. He wanted to charge us 300Rs to lead us to the top, saying that we would get lost in the jungle and that there were many ways that led up. But we were just “brave enough” and somehow believed that he only wants to earn some money, and we finally started our journey alone. 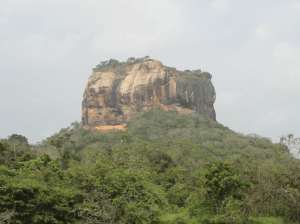 The walk was nice and calm. There are plenty of very old stairs that lead to an ancient sleeping Buddha statue. We were completely alone on our way, which gave us a special felling of connection with the nature and the rocks surrounding us. At the statue we met another couple and a guide who told us how to get to the summit, as there was no evident way to it. We had to climb a little bit, and we finally got to the top where was this amazing view of Sigirya rock just in front of us. We stayed there for a while to enjoy the amazing view of Sigiriya rock and the surroundings and then headed down back to where the bus dropped us off. We found a really nice and cheap restaurant near that point where we had some rice and curry with fresh mango and papaya juices, and then went back to Dambulla to our guest house to pack and prepare for the journey to our last destination – Negombo. 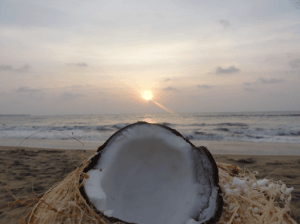 Negombo is a city on the west coast a few km north from Colombo, very near to the airport and for that reasons a very common traveller’s destination. We asked a tuk-tuk driver to take us from the main bus station to the area where the most guest houses are located, and choose the cheapest, but a nice one, although a bit humid. The journey was, again, pretty tiring as we had to change plenty of buses, so we only went for a swim to the closest beach. We waited for the sunset having a delicious coconut Nejc found on our way. Later, an outgoing guy from Ireland joined us with the dinner in a small and cozy restaurant with whom we had an interesting conversation, and we ended our day chilling on the terrace of our guest house, enjoying the breeze and the sound of the sea waves. 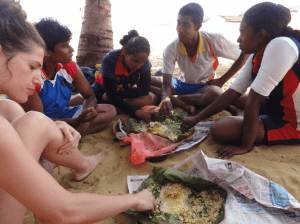 We spent our last day on the beach, but we had to walk about one km to find a decent one, because the one from the day before was pretty dirty and very unpleasant. Anyhow, it was really worth it. A long sandy beach with palms and big waves, not many tourists and the most expensive beer in Sri Lanka is what Negombo had to offer.  We were lucky to find some locals playing volleyball and Nejc was exciting to have a chance to play with them. After three sets in the scorching heat they invited us to have lunch with them, a home-prepared rice and curry wrapped in a banana leaf. We shared the meal in the shade of the palm trees and after a funny exchange of words in very broken English; we went for a swim together. Just spending these few moments with the friendly locals reminded us how warm, helpful and interesting the people of Sri Lanka are.

Heading back to our place, we were already preparing ourselves for the morning flight and the start of our travel through India.

One thought on “THE FINAL LEG OF SRI LANKA”