From Hampi, we took a bumpy overnight sleeper bus to Kudle beach, one of the three main beaches of Gokarna. Although the bus name of “Paolo silk travels” promises a fluent ride, it was pretty much the opposite since the roads of India aren’t in the best condition, but arriving to one of the most beautiful beaches of Indian west coast was really rewarding.

It was around 5 a.m. when the sound of the sea waves welcomed us and everything was so quiet and calm. There was nothing around us but a few cows resting on the beach and we decided to join them and wait for the sun to rise. Slowly the morning dawn started to brighten the surroundings and we found ourselves sitting in the middle of the sandy beach, surrounded by many small and cosy guesthouses. After a while of listening to the sea and the bird songs, we started looking for the accommodation. 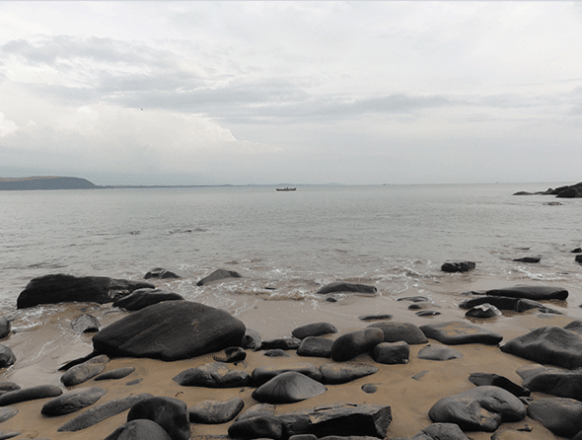 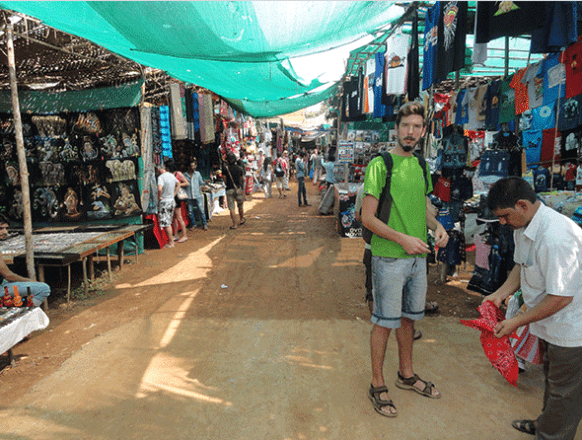 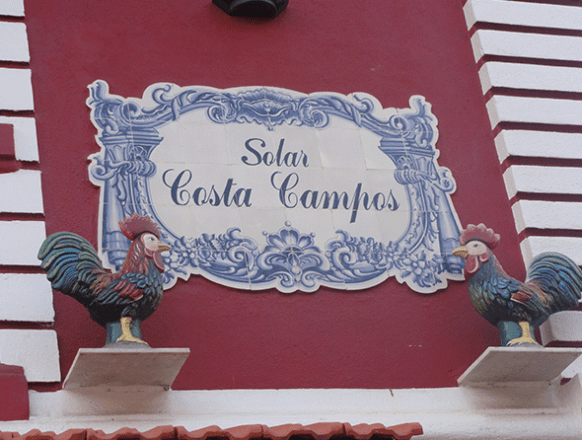 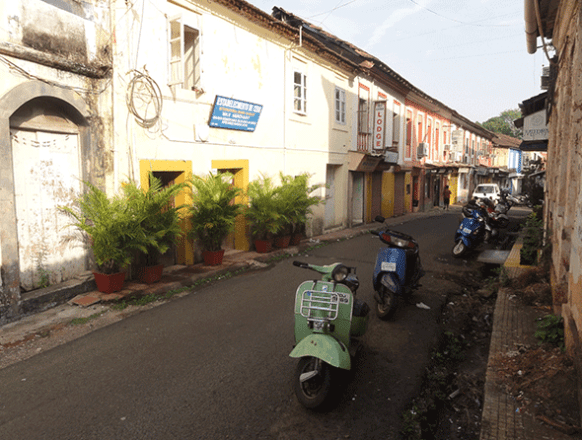 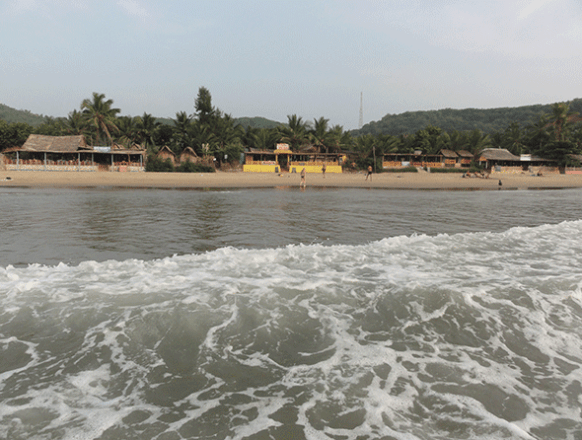 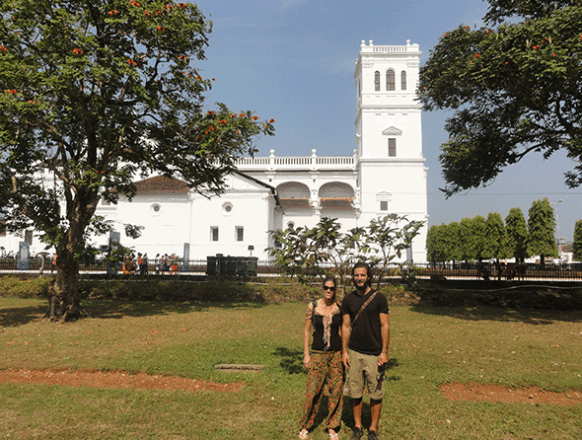 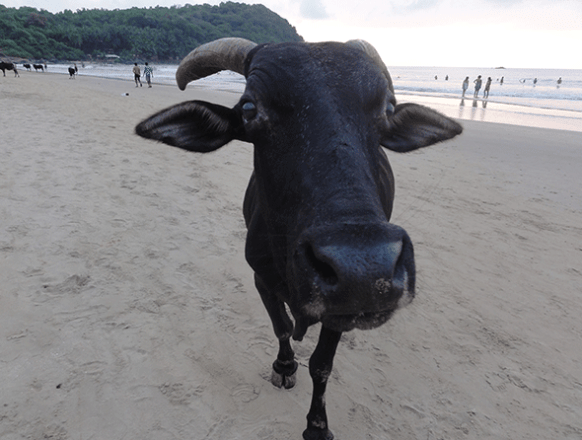 Kudle beach is full of very basic bamboo huts with sandy floor, with not much more but a hard bed and a mosquito net. There were also some nice and pretty rooms available, but since the huts only cost 250Rs per night (3,20€), we decided to settle ourselves in one of them. It didn’t take us much longer to put on our swimming suit and jump into the sea. The feeling was amazing, and it was even better because the waves in Gokarna aren’t big at all, and we actually managed to swim. After we cooled down a bit from the heat and the humidity, we sat down for a cup of coffee to meet our Lithuanian friends, whom we caught again, in a nice restaurant overlooking the sea. We spent the first two days together over some delicious food and nice conversations.

The next day we went to the market together where we bought some fruits and vegetables, and then returned to the beach to enjoy the sun and the sea. There wasn’t much more to do there, or, like Olga used to say while we were tasting different food from different restaurants: “The main activity in Gokarna is eating.” Very true. The food was delicious, the views amazing. But we heard from other people that there were more nice beaches to see around, so we decided to go for an adventurous excursion which first took us to the big and crowded Om beach. Further on there was another one waiting for us: a beautiful and neatly hidden Halfmoon beach with only two small restaurants and just a few people sunbathing and dipping their toes in the sea. We spent the day here, but the same evening Olga and Vaidas were leaving for Hampi. However, we weren’t left alone since there was another kind and very interesting person we met: a Swedish gentleman from the old hippie era called Chris with whom we spent another two days chilling on the beach and drinking tea in the restaurants. He was really nice company, and his interesting appearance with a long braided beard made him even more intriguing. But the moment of our departure finally came, and when we were leaving, Chris gave us the funniest, but probably the most useful gift we could receive for our travels: a roll of an original super high quality Swedish toilet paper. We accepted it with a smile and headed towards the railway station to take our train to Goa.

As soon as we arrived to the station, we met an adorable Austrian traveller Felix who was going to the same destination. We immediately got along, so we decided to spend the Goa-days together. Our plan was not to visit the Goan beaches as most of the tourists do, but see the interior of this small former Portuguese colony. We boarded our train towards Panjim, the capital of the state, and had absolutely no idea where we were heading. Actually we were expecting to arrive to another big and dirty Indian city, and we were very positively surprised as soon as we got there: a small, cosy, Mediterranean-like city was spreading around us with all its colourful 19th century houses with its typical Portuguese balconies. We immediately started to feel much more comfortable and it didn’t take us long to find a nice accommodation in one of the Goan typical houses. Another big and pleasant surprise was awaiting us when we opened the menu of the restaurant where we were staying to find out they were offering a delicious Goan bred with chorizo. It felt incredibly good to eat some meat after a long time eating only vegetarian food. It was a perfect start of discovering this non-typical state of India. Later on we went for a walk through those pretty narrow streets of Panjim, just enjoying the delicious beef street food and observing the architecture. We finished our day having a beer in the balcony of some nice restaurant, overlooking the beautiful Panjim streets.

The next day we went for an excursion to Old Goa, a very small Christian town full of churches. There were thousands of people gathering around one of them, standing in a long queue to see the relics of St. Francis Xavier, a missionary who brought Catholicism to Goa. His relics are exposed once every ten years, and this year was the last time they were showed to the public. It was interesting to see the Christian part of India, although the churches can’t compare with the European ones at all. When we arrived back to Panjim, we found a really nice hostel, The Quarter hostel, run by a German girl and her Indian friends. We spent quite some time there during our stay in Panjim, having nice conversations with Laura, the owner, and other tourists.

The third day we headed together with Felix to Anjuna, the heart of the hippie life. The town itself is nice and easy, but the main attraction there is the Anjuna market, which is organized every Wednesday. The market was probably the biggest one I’ve ever seen so far, and we spent the whole day wandering around, seeing many different things, from Indians to Westerns, and bargaining for the prices. But for me personally the highlight of the market was the lunch I had, a delicious organic salad which was, first, amazingly tasty, second, the only salad you can probably have in India without being worried of getting any stomach problems, and third, it was incredibly expensive. I didn’t buy anything for myself on the market but this famous salad, which will definitely remain a nice memory from India. But we did buy something else: ten really nice looking cotton hammocks which we decided to send to Slovenia and try to sell them to our friends. Carrying the 15kg packet full of hammocks on a scooter with the driver and ourselves behind was already fun itself, but the funniest thing of all was sending the parcel, the thing we did the next day.

There is this law in India that before sending the parcel you have to put it in a cloth wrap. So, once everything was packed in the box and well wrapped with the duck-tape, we took it to a special tailor workshop where they made a custom-made cloth wrap for it, which took about half an hour. After that we took our well-dressed parcel to the post office where we put it on the counter and waited for about ten minutes for our turn. It surprised us when we were told to get behind the counter, into the post office where all the other offices were. Once we got there they told us to lift our package and take it to the scale to weigh it ourselves. The clerk told the one on the counter that our parcel weighed 15,2kg and told us to go back to the other side again. We spent another ten minutes waiting in line, only for the clerk to tell us our parcel was too heavy: it could weigh maximum 15kg. Exactly, they wouldn’t send it out just because of the bloody 200gr of its overweight, which meant going back to the tailor to tear the cloth, unfold the box and take out the two books I wanted to send back home, wrap the box again, sew the cloth and take it back to the post office, go around inside the office to weigh it again (14,37kg, I could have left one book in it!), go back to the counter, and finally send it. It took us the whole morning to do the procedure, so you should really check out our hammocks!

We spent the rest if our day in the Quarter hostel, and when the evening approached, we took an overnight bus to Mumbai.