Taking the overnight train, we reached Hampi early in the morning. One thing was clear from the start; the landscape was completely different to anything we have seen so far. Huge rocks and boulders, neatly stacked on one another like someone had put them there, were giving an unearthly impression of a forgotten desert. But the green oasis’ patches of palm and banana trees accompanied by an odd river here and there were a nice contrast, adding some life to it. The whole area around Hampi used to be part of the biggest Hindu empire ever. Small and big ruins of shrines, temples and other buildings from the almost forgotten dynasty are scattered around everywhere, some neatly hidden and others exposed greatly. 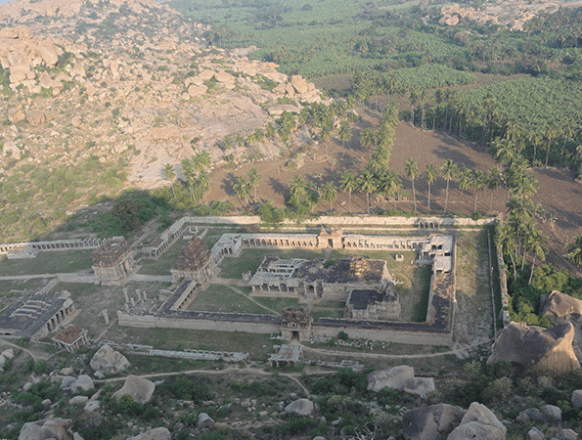 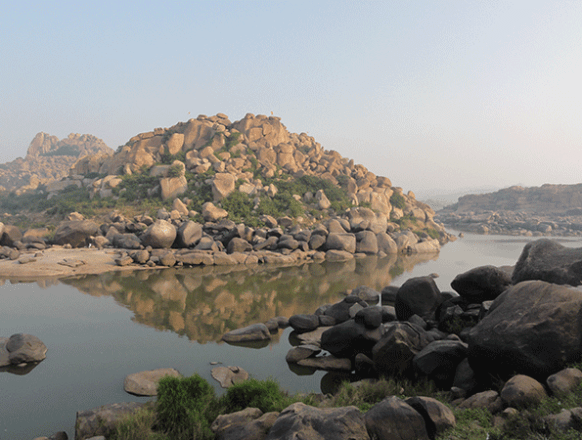 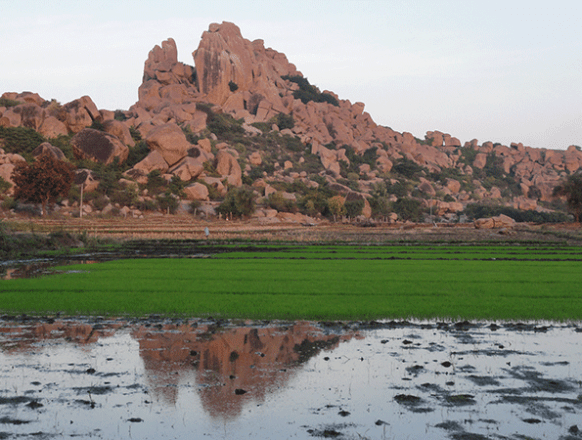 It was the imposing, 50m tall gopuram, the Virupaksha temple tower that greeted us on our arrival to the tiny town of Hampi. The town is composed of a few guesthouses, restaurants and shops, the big Virupaksha temple and a smaller village behind it where most the locals live. A small boat ferry takes mainly tourists to the other side of the river to Hampi island, a chill-out area with guest houses, huts and restaurants mostly suited for the new-age hippie travellers. There we rented an adorable little hut with walls made from mud and a banana leaf roof. It had a nice sitting area outside, a cosy banana hammock and a lovely view over the Hampi river. 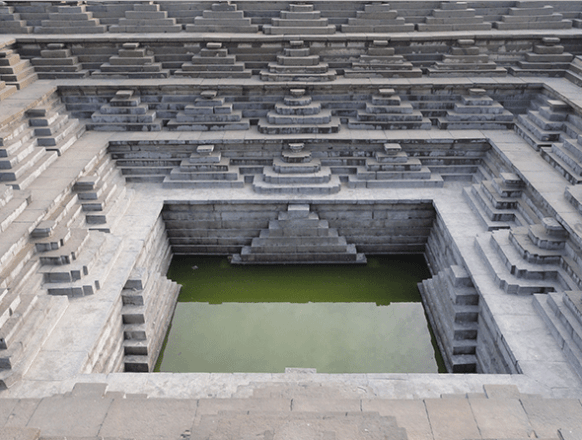 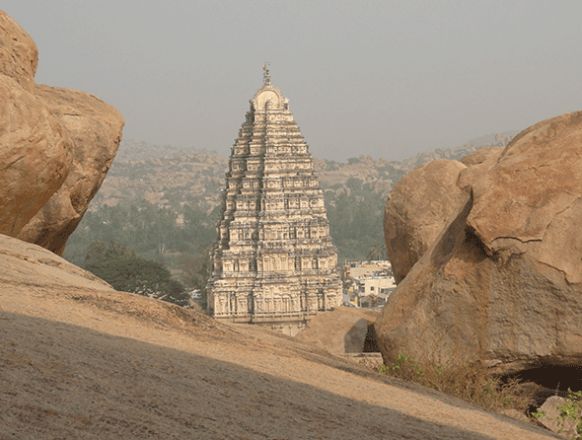 We stayed on Hampi island for three nights and spent most of our time relaxing and catching sunrises and sunsets. The most memorable sunset was from the Monkey temple. We rented push-bikes to get there and had to climb 500 steps to get to the temple on top. Reaching the top, we had to put our footwear off before stepping on temple grounds. The tiny temple itself with a bunch of monkeys fooling around was cute but the view from the hilltop was much more spectacular. All the rocks and boulders where changing colour from brown to red as the sun was going down and we found a nice and quiet space from where we observed the sunset. We were feeling good and relaxed but when we wanted to start our descent we realized Rea’s flip-flops got stolen. Naturally she got really upset and angry and she had to walk down barefoot, thinking about the hard way back on push-bikes at night… barefoot. Walking down, we were inspecting everybody’s feet in case somebody was wearing her flip-flops. We almost gave up and we were already unlocking our bikes at the bottom of the hill when I saw the Brazil-colored flip-flops on the feet of a young Indian fellow. I pointed to his feet and he immediately knew what was up and he put the flip-flops down and took a step back. Rea couldn’t believe it and shouted angrily at him, almost slapping the embarrassed youngster who was being laughed at by his friends. We left on our push-bikes, Rea still feeling upset and myself feeling proud at getting her flip-flops back.

Other than visiting the Monkey temple and getting lost in the countless rocks and boulders, there wasn’t much more to do on Hampi island. We grew tired of observing all the pot-smoking new-aged hippies who seemed happy but disinterested and not really present in Hampi. We decided to head back to the “mainland” where we got a nice room at a guesthouse. The main reason of switching sides was to see some of the ruins and temples in the area. The whole area is over 30 sq km big and there are more than 3000 ruins and monuments to see. While chilling and enjoying some good food at the Funky-Monkey restaurant, we made a plan of what to see and how to make the most of it in three days. The restaurant owner named Shiva was very helpful with his suggestions and recommendations; after all he is a borned and raised local. 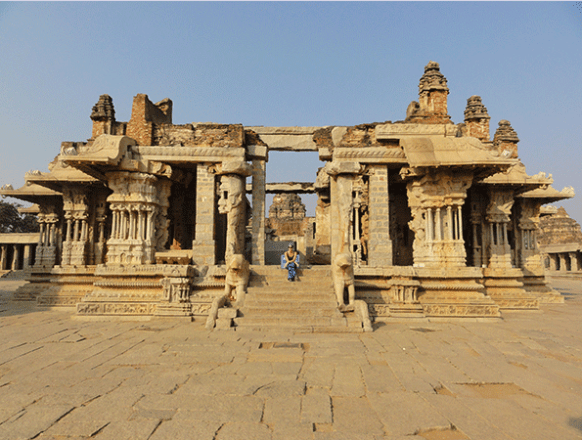 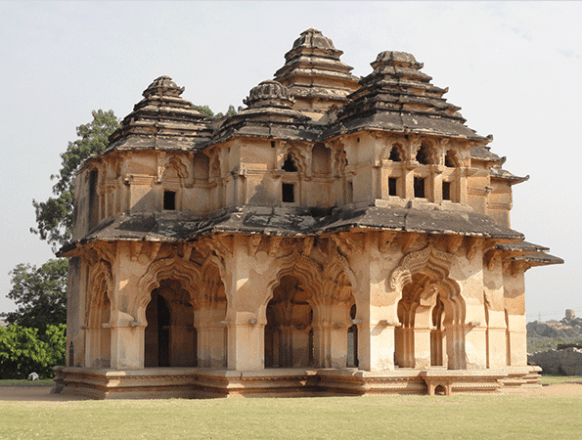 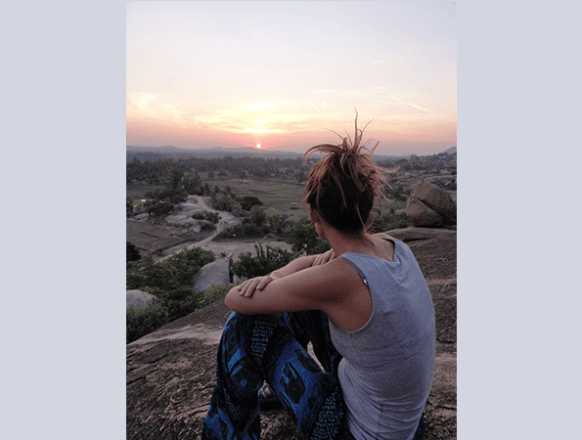 We spent the first day exploring the nearby surroundings and soon we got intentionally lost between the forgotten ruins and banana trees. We were finding our own way around and we appreciated the fact that no one was bothering us or desperately trying to sell us something. Hampi really is a place were you can find some peace and quiet if you just wander around a bit. We realized that also the next day when we were visiting the bigger sites, moving from one to another on rented push-bikes. During that time there was a festival going on and it seemed that the whole countryside came in to Hampi. But event though there was so many people roaming around, the sites are so big and widely spread that you can almost always escape the crowds and find a piece of it to enjoy for yourself. On one of these private moments, we only got interrupted by a friendly cobra snake, crossing our path as we wanted to climb some stairs to a small ruin temple. A mixed feeling of fear, respect and excitement came upon us as we observed the snake with amazement from a safe but still close distance for a few minutes before we left it be and continued our exploring. Indeed, there was plenty of exploring to be done. We visited an abandoned underground temple which has ankle-deep water running through the main chamber with barely any daylight coming in, the old Elephant stables which used to house over a dozen of these majestic animals, a small but beautiful Lotus palace made out of red lime-stone and an old square water-tank with well architectural placed inclining stairs, just to name a few. Our curiosity also took us to a bunch of smaller ruins scattered around but on the way I somehow managed to puncture my front and rear tyre on my push-bike. Luckily it happened towards the end of the day but I still had to cycle back to town with flat tyres. It wasn’t the best or shortest ride ever but after a beautiful and really full day I felt happy and took it with a smile. 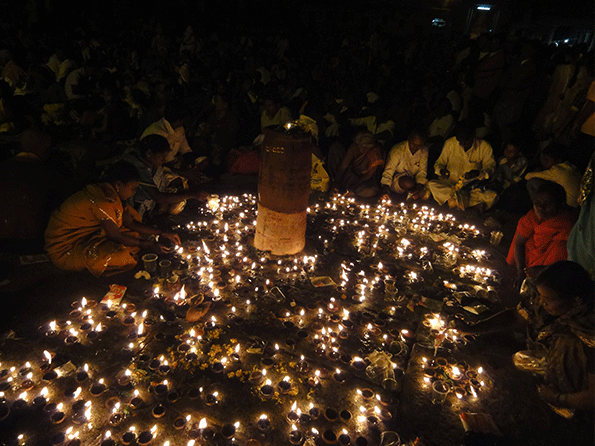 The same evening, the festival was going on and the main Hampi street leading to the main temple was packed. There were so many food stands and shops set up on both sides of the dusty road and we had a hard time moving through the crowds of locals and about half a dozen cows. Squeezing through the temple entrance, we managed to get a glimpse of an even bigger crowd singing, lighting thousands of candles and giving flower and coconut offerings to the different Hindu deities. Plenty of people brought half of their homes there and stayed on the temple grounds overnight. It was a sight to see and an opportunity to experience the energy of one of the many Indian festivals.

We spent the last day wandering around the main temple and the nearby ruins, observing the festival aftermath and casting our eyes over some beautiful monuments. Hampi really is a great place to visit, relax and explore. We wish we had more time but again it was time to move on. On towards Gokarna and towards the next thing India can give or show us.

Bottom line … we were very happy in Hampi.

3 thoughts on “HAPPY IN HAMPI”