We left Sri Lanka with very good impressions and felt ready for the next challenge, India. We actually had some trouble getting on the flight to India since we were only able to submit a one-way ticket at Colombo Airport. After the officials made some double-checks and asked us how we plan to leave India about a dozen times, they finally let us through.

We landed in Thiruvananthapuram and after no complications at the customs counter we took a taxi and headed towards the city center in search of accommodation. Finding a cheap place to stay in Trivandrum (the other name used for Thiruvananthapuram) proved to be more difficult than expected. We where searching for a fitting hotel or guesthouse, with our heavy backpacks on our shoulders, for more than an hour and a half. The locals didn’t seem to be very helpful and were not prepared to give us a few moments of their time. Every small hotel that we checked was said to be full, even though we could see that there were still some rooms available. It was like no one wanted us to stay at their place which was really weird from a business point of view. We then finally found a room, even though it was a little over our budget, and dropped our bags before we went out for some lunch. The next thing was getting an Indian SIM card. After visiting over 10 different shops we were baffled that none of them where able to sell us one. It seems that getting a SIM as a foreigner is impossible in India. Most of the sellers were telling us that we couldn’t get one with no permanent address in India; some said it was impossible and others said we need a passport copy, an India visa copy and an ID photo. After a couple of hours of this nonsense we gave up on it for the time being. We then decided to walk some more and go to see the Padmanabha Swamy temple, only to find out that we can’t even go in. The temple is heavily guarded by men with machine guns and they kindly explained that the temple is off-limits for non Hindus and especially foreigners. We were only allowed to walk around the temple walls and prohibited from making photos. We did so and then returned to our place of stay totally baffled and confused. We knew we were in for a culture shock, but didn’t realize we would feel so unwelcome in the big city of Trivandrum. There were only a handful of people that actually talked to us and helped us a bit with directions.

That night we decided to leave the big city as soon as possible, which was next morning. After check out, we went straight to the bus station, left confused again with the information about which bus to take to Varkala. The guy at the enquiry counter was just pointing his finger at the bus platform and kept saying “15 minutes”. Eventually, a bus showed up and an older man, who was observing us getting directions to no avail, said it was the bus to Varkala. We anxiously got on the bus and felt a bit of a relief, knowing that we’re leaving the city and hoping we would be better off in Varkala. 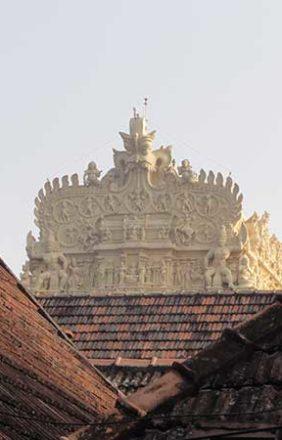 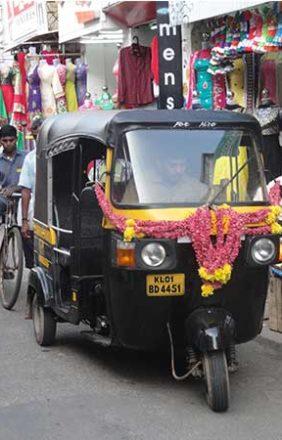 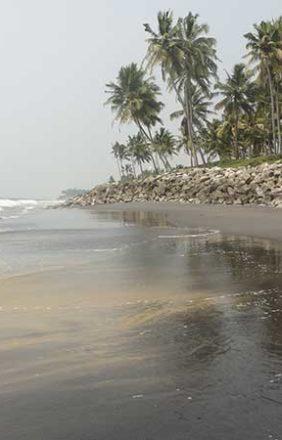 Varkala, a nice beach resort and the only beach with cliffs in India, felt much better from the start. We had no trouble finding a place to stay as we took the first room available for a reasonable price of 500 Rp. It was supposed to have hot water and the “hi” speed Wi-Fi didn’t work in the room, nor was it any better on the hall stairs just a meter from the router, but we didn’t complain since we were only planning to stay for two nights.

Varkala is very tourist orientated as it has countless bars, shops and restaurants sitting at the top of the cliff, overlooking the sandy beach underneath. Behind the first row of these shops, bars and restaurants, there are plenty of yoga and Ayurveda centers as well as a good choice of accommodation. Needless to say, the prices here are pretty high, even for Kerala standards. But once you’re there, you feel relaxed and more willing to spend because everything is on hand and everybody wants you to take a look in their shop. We ended up spending more than we would have liked in the first two days, but we enjoyed some good food and miraculously even managed to buy a SIM card. Passport and visa photocopy and a picture ID were needed, but we got it at last. The discovery of the Coffee-Temple, a cafe ran by an older English couple, was great as well. They serve real, European style coffee and really good breakfast. We could tell that the food and drinks quality was much better here and enjoying the whole European atmosphere with a delicious cup of coffee felt really well. Of course we didn’t have all our meals and drinks here, as the prices were a bit higher, so we opted to try out other Indian restaurants as well, enjoying the food they had to offer. Having dinner on a restaurant rooftop terrace, overlooking the ocean with waves crashing on the shore, was also a nice experience.

As curious as we are, we wanted to explore the beaches. The main Varkala beach under the cliff is nice but full of people: many tourists, foreign and Indian, and a big fleet of locals selling clothes, fruits, souvenirs and such. Further up coast, outside the tourist resort, we found there was another beach. A small, less than a kilometer long beach with almost nobody on it. The sand on this beach was shiny black, only mixing with regular sand on the point where the waves brake, giving it it’s name: the Black beach. It was an interesting site to see indeed. We had a good time on the beach, fighting the big waves, playing with the sand and getting roasted by the sun, so we opted to stay an extra day. But on that second night, Rea got sick, throwing up in periods for the whole day and catching a fever as well. We are still not sure if it was because of something she ate or because she was on the sun for too long. An extra day turned out to be four extra days as we decided not to move before Rea was healthy. I was taking care of her, trying to get her to drink as much water as possible so she wouldn’t dehydrate, and getting her whatever food she felt like eating. After that first day of vomiting she was starting to get better but was not able to do much more than sit up and maybe eat something light. Eventually she got better and we moved to another guesthouse that was more comfortable and closer to everything so that made it a bit easier for her. Still, she wasn’t healthy just yet. Meanwhile, when I was not taking care of her, I went to the beach for short periods of time or going out to eat and also bringing back some food for Rea. But it quickly got a bit boring and after almost a week in Varkala, we had to move on. Rea got better and we took the train to Alleppey / Allapuzha, the Venice of the east as it’s called by many. It’s one of the best places from which you can go see the famous Backwaters, the inland waterways, a network of small and big canals that separate small pieces of land in one of the biggest lakes in India. After just a short visit to Trivandrum and a long and not so exiting week in Varkala, we felt this was the true beginning of our Indian tale.