Leaving Tissamaharama and the hot and humid south of Sri Lanka was refreshing in more ways than one. Not only did the temperature and humidity drop, it was the vibe that also changed. Traveling again by bus, we’ve noticed there was no rushing on the street, locals that came on the bus were much more relaxed and smiling at us with their curious eyes. Very few spoke English, except for the bus driver who was also much calmer than the other bus drivers we’ve seen so far, honking his horn only when really necessary and not every other second. The drive was good and the scenery even better, with the jungle spreaded hills and mountains slowly showing their faces in the distance. 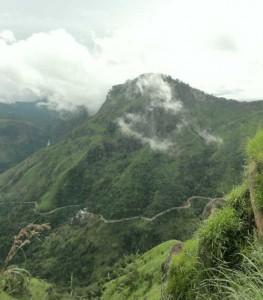 The road to Ella under Ella’s rock

It took three buses and about four hours to get from Tissamaharama to Ella. The last leg from the last bus was amazing. We were already in the hills, driving on a steep and narrow road full of twists and bends, admiring the beautiful green scenery on our right and before we knew it we arrived in Ella – a small and sleepy town, sitting in the mist between Ella’s rock and little Adam’s peak. A friendly local greeted us as we got of the bus and offered us accommodation, and after seeing the room that his family is renting we’ve decided to take it. As soon as we dropped our bags, the clouds were starting to swallow up the surrounding area and we knew it was going to rain. The rain was heavy and it didn’t show any signs of stopping, so we spent the night in our cozy and warm room. We could feel that the temperature dropped quite a bit and due to the rain our morning plans were put in to jeopardy.

A woman’s singing in the nearby school was our wake-up call and we were happy to see that it had stopped raining. The sky was almost entirely clear; it was just a mysterious mist that was hugging the nearby hilltops. We came to the highlands to do some hiking, and Ella’s rock was our first challenge. Our host’s neighbor gave us directions, nicely drawn on a piece of paper. We were actually walking on the rail track for the first part of the way, meeting plenty of locals that use this railway as the most direct route from their houses to the small city of Ella. We also met two hikers from France, Fanny and Nicholas, and we did the rest of the way together. Of the tracks, through the thick manna bushes, over a small tea plantation and up the hill through the forest and after two hours we arrived at the top. The view was nice, especially at the little Adam’s peak and the small town of Ella. The rest of the view was also nice, but we couldn’t see as far as we wanted due to the mists and fog in the distance. The weather was still good though and after a small rest on top we’ve decided to do little Adam’s peak in the same day as well. And we did it, after the long way up and down from Ella’s rock, the little Adam’s peak was not as challenging. We made it up just in time to get a good view from another perspective before the misty fog had started to rise and just in a few minutes the whole area was white, fresh and damp all over. We all headed back to Ella, we shared a beer with our new friends from France and started making plans for the next day. 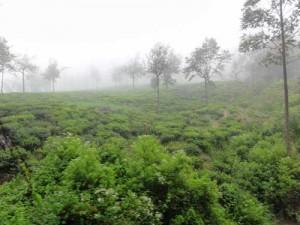 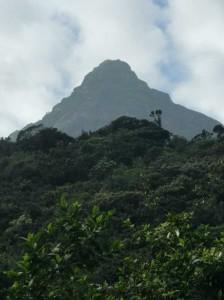 Adam’s peak from below

After a good night’s sleep, we boarded a train that took us on the very same tracks we walked the day before. And the train ride was amazing for the sights and scenes it shows on the way. A thick jungle, small wooden houses and huts where the real Sri Lankan’s live and heaps of tea plantations where a constant view from our window in the old and slow train. The view would have been even nicer if it had not been so misty and foggy yet again. But the mysterious mist added to the charm of the tea plantations under Nuwaraeliya, the highest city of Sri Lanka, where the temperature dropped even lower. Seeing workers picking green tea leaves in the cold, wearing nothing more than flip-flops were a sight to remember. Soon the train arrived at Hutton, where we got of and took the bus towards the footsteps of Adam’s peak. It started raining heavily again and once we got on the crowded bus it was already dark. On the bus we met another traveler from France, Eric. We were all going in the same direction and we decided to go to the same guesthouse and do Adam’s peak together. But the weather was bad. I don’t know how the bus driver was able to drive in pitch dark and in the pouring rain without the use of windshield wipers. We had no idea what the surroundings looked like at that time. The bus got us to Dalhousie, the last small village under Adam’s peak where we got a place to stay and some dinner and tea with Eric. We were planning to climb that evening but since the weather was terrible we’ve decided to give it another day.

The climb was hard but really rewarding. We woke up at 2am and at 2:30am we were already on our way up. Walking in the dark under a million stars, well dressed because of the cold and geared up with our flashlights to show us the way. The purpose of starting so early was to catch the sunrise on top and given the good weather report we were hoping for just that. After two hours we arrived on top soaking wet from our own sweat and it was a good idea to bring some extra clothes to change, but it still wasn’t enough because it was so cold and windy on top. We were lucky that the temple keeper opened the door of his shelter for us and served us some hot tea. The tea was just what we needed and we had a pleasant conversation in broken English with the temple keeper who lives there and takes care of the place. He overcharged us for the tea but it didn’t matter, we made it to the top and the sun was just about to rise. Unfortunately the mist and fog have reappeared at the wrong time and we were standing on top of Adam’s peak in a big white cloud. In about half an hour or so until the cloud disappeared and an amazing view was there to admire in every direction we looked. Some smaller mountaintops and small valleys were being crossed over by clouds of mist and yet again we felt as the area had something mysterious about it. The wind was still blowing hard and after we absorbed the surrounding energy of the place it was time to go back down. Going down the 5400 steps was perhaps even harder than going up because it makes your legs feel like rubber and your knees like jelly. But the way down was beautiful, it wasn’t dark anymore and we finally saw where we actually were and when we were half way down and turned to see how far the top was, it really felt as a big accomplishment. On the way down we passed a lot of waterfalls, which we could only hear during the night. 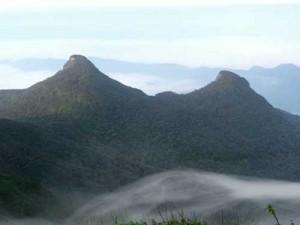 The view from Adam’s peak 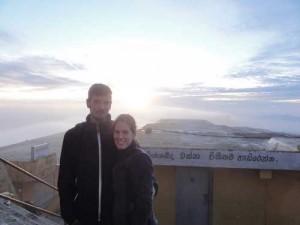 Catching the surise from Adam’s peak

When we came back to our guesthouse we were quite tired and starving so we really enjoyed the rich breakfast they’ve served us. We had just enough time to take a hot shower and pack our stuff because we had a long day of traveling ahead of us. We shared our first tuk-tuk with Eric to the bus station and we took the bus back to Hatton railway station. The scenery was once again really pleasant to the eye, driving through the tea plantations and having the pleasure to gaze at the lake nearby. Sights we were unable to see two nights before because of the dark and rain were known lay out around us. At one point the who-knows-how-old bus got overheated and we had to stop two times so the driver and his assistant could somehow fix it using just a couple of liters of water and a rubber band. It was soon over and we arrived in Hatton, bought tickets and boarded our train to Kandy. At that point we said goodbye to the friendly traveler from France who shared the last two days with us. On the train ride, we were both really tired, but also ecstatic with the experience that the highlands of Sri Lanka have given us. It’s really a special place that gives you a feeling of mystery, spiritual connection with the beautiful nature and a sense of calmness, which no one knows when, will find it again.