We were very excited and happy that our New Zealand travel adventure had finally started. It was a sunny Saturday morning when we left Auckland and we were headed north.

The first major stop was the Waipoua forest where we did a couple of walks in the Kauri forest. 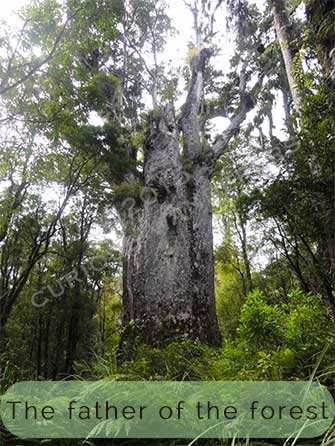 There we got acquainted with the lord of the forest, Tane Mahuta and the father of the forest, Te Matua Ngahere, which are the tallest, biggest and the oldest Kauri trees left in New Zealand. Kauri trees once grew over 60m tall and were up to 2000 years old, but have been mostly cut down and logged. Today you can find very few and they are protected and cared for. They still use Kauri wood today though, but only the dead and the old. A few days later we also visited a Kauri clock factory where we were greeted by a couple of older ladies that showed us plenty of finished Kauri wood products. A countless number of clocks of different designs and a host of other artistic furniture, all made from old, long dead Kauri trees.

Leaving the forest and its winding roads behind, the road brought us to the lovely and sunny Ahipara beach which is actually the beginning of the famous 90-mile beach. We made a longer stop there to catch some sun rays and for Rea to do her “sandy” yoga session before we headed for camp, somewhere half way on the probably longest beach in the world.

On our way even further up north, we stopped at New Zealand’s biggest sand dunes.

They are usually littered with people bodysurfing the dunes with small surfboards, something that also interested us to try, but since it was raining the previous night the sand was still too moist to ride on. We did take a walk across the windy dunes, but soon headed towards the most northern point of the country, Cape Reinga. The view from the cape and its lighthouse was stunning and we were able to see two seas colliding and merging into one. The Tasman Sea from the west and the Pacific Ocean from the east. 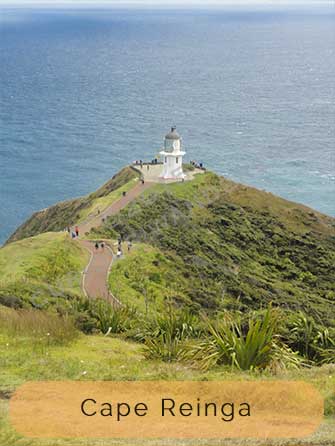 The following days we continued our journey on the eastern coast returning down south towards Auckland again. On the way our curiosity got the better of us as we explored almost every small peninsula in search of beautiful beaches. And we found more than a handful, Maitai being probably the best we have ever seen; a perfect half circle stretch of white sand and the most inviting turquoise color of water.

We also passed a few towns on the way. Most notably the Lonely Planet’s highly recommended Kerikeri and Kawakawa, but we found them very plain and uninteresting apart from the artistically designed Hundredwasser public toilets.

Soon the week was over and we found ourselves back in Auckland; this time only passing through, stopping at our old home but more than happy with our new one on wheels. We also spent a night at our Slovenian friends’ Eva and Marko before heading off again, towards Rotorua.