When talking about Australia, there are plenty of things that come to mind. Crocodiles. Kangaroos. Koalas. Venomous spiders and snakes. Surfers. Desert. Good coffee. But apart from all that, I am pretty sure there is one more image that sticks in your mind: the one with the wild coast and its enormous waves breaking against the massive cliffs.

We had been stuck with this image for a long time, and once we arrived in Australia we knew we were going to witness it live no matter what. The Great Ocean road, a drive that starts just an hour from Melbourne, and stretches over 244km all the way to Warrnambool, seemed to be the best place to enjoy Australia’s coastal wilderness. Its name is very well deserved as it is considered one of the 10 top coastal drives in the whole world. Doing a three to four day road trip is the best way to embrace the beauty of Australia’s southern coast, and without hesitation we decided for a three day road trip. 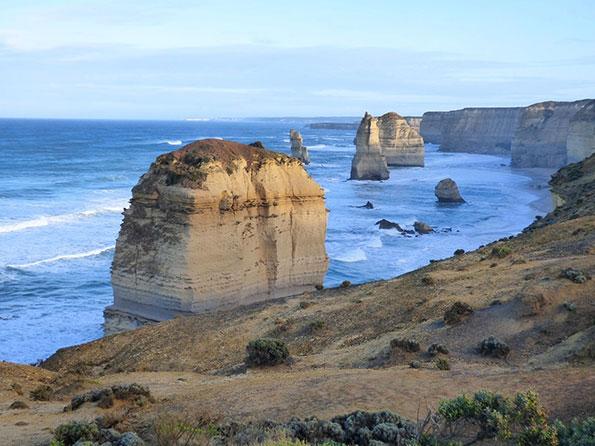 First things first: if you’re planning on doing this road trip, DON’T RUSH. Many people do a crazy amount of kilometres just to reach the 12 Apostles (Great ocean’s road main attraction) and then drive back to Melbourne in one day, but the truth is that the 12 Apostles are only the beginning. So, we suggest you take your time, and depending on how thoroughly you want to explore this part of the Australian coast, take three to four days to complete the journey.

Second thing: you will probably start your trip by renting a van. There are plenty of options in Melbourne, and we went for the cheapest one. We chose Hippie Campers, parented with Apollo campers, and were more than satisfied. The only thing that bothered us is that we were basically forced to pay almost the same amount of money for insurance as we did for hiring the van, but other than that it all worked out perfectly.

Last, but not least: accommodation. There are hundreds of options for accommodation along the road, including many camp sites, so depending on your budget you will choose the one that suits you best. The camp sites are well equipped, and we would definitely recommend staying there, especially if you’re travelling on a low budget. Besides, staying in camp sites is part of the adventure, isn’t it? 🙂 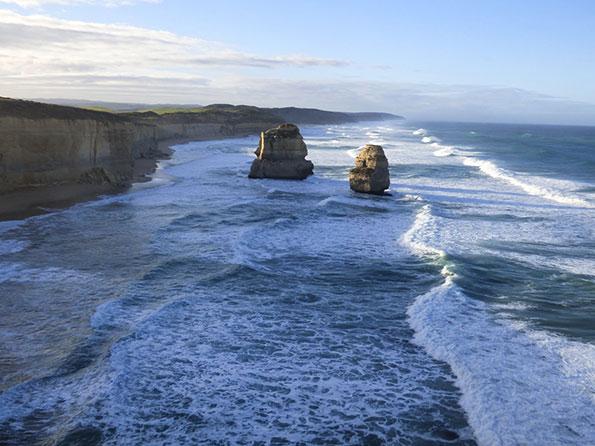 You will probably start your journey in Melbourne, but the real thing begins in Torquay, a few kilometres away from the city. There, you will reach the coast, and you will get an awe-inspiring view right at the beginning. While enjoying the first glimpse of this wonderful coast, don’t forget to do your first stop at Anglesea Golf Club. This golf club is FULL of kangaroos, and I can give you a 99,9% guarantee that you will see at least ten of them. We were completely amazed by the kindness and calmness of these wild animals, especially when we saw we could get really (I mean REALLY) close to them. We didn’t try to touch them though, as Nejc read somewhere that they can get very annoyed and kick your ass away 🙂 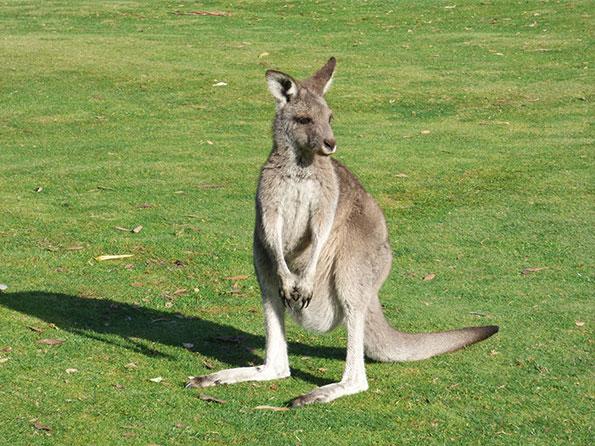 When finished with observing the kangaroos, head to the Cape Otway lighthouse. To tell you the truth, we were not willing to pay the crazy amount of money they ask for getting up to the lighthouse, but apparently you get a really beautiful view from it. (Instead of paying for it, we checked the postcards with the picture of the view and left just as satisfied :)) However, there was another and much better thing that attracted our attention while driving down to the lighthouse: the funny, slow and clumsy – koalas! 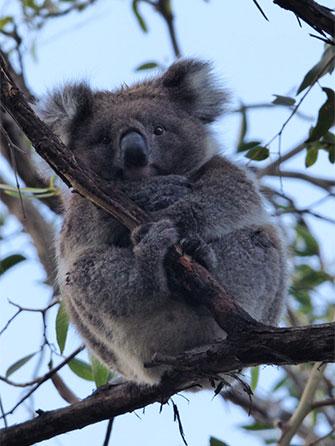 Continue your journey, and hopefully you’ll be on time to reach the 12 Apostles by the sunset. Unfortunately, we were a bit too late, and therefore went there for the sunrise, but the truth is that witnessing the magical sunset light laying over the impressive cliffs is way better. However, when we reached the 12 Apostles the next morning, we were struck. It doesn’t happen to me many times, but when I saw the massive cliffs that were formed over 20 million years ago, I got goosebumps all over my body. My mind just couldn’t perceive the reality of those formations, and we just stood there and watched the never ending waves breaking against those giant structures. I think we must have stayed there for an hour or so. You really don’t want to rush as this is a once-in-a-lifetime experience. 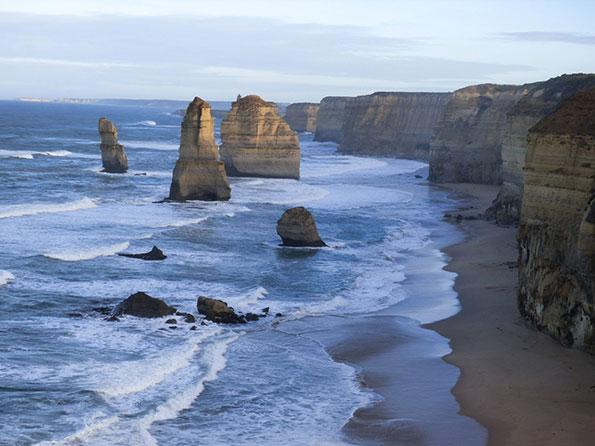 Despite the fact that the 12 Apostles are the main highlight of the Great Ocean Road, you will be no less amazed by the things you’ll see afterwards. Just a few minutes from the 12 Apostles, you will reach another view point, called Loch Ard Gorge. There is a nice wild beach you can walk down to; just sit there, still and calm, feeling the ocean. 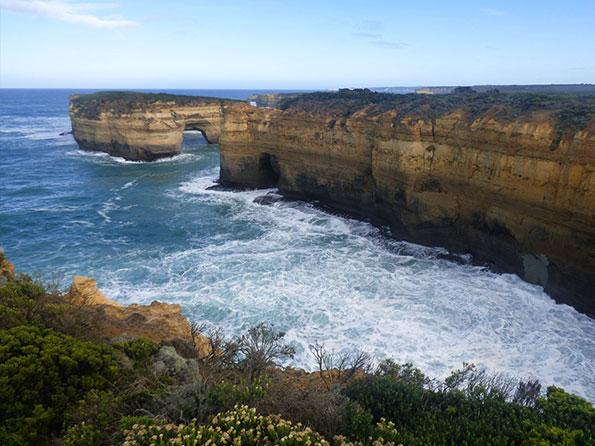 The next stop is The Grotto, which I must say looks much more amazing in reality than it does on the picture. As you walk down the stairs, you can look through the cave and see a small pool of water with the ocean in the background. 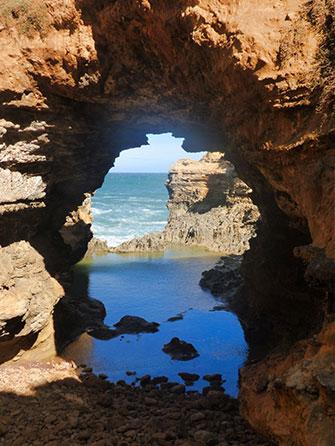 The next thing to see will be the Arch, another amazing formation where the sea meets the rocks, while just a couple of minutes further you’ll find my second favourite view of this road trip: The London Bridge. Again, just sit and observe the wilderness of the nature surrounding you. 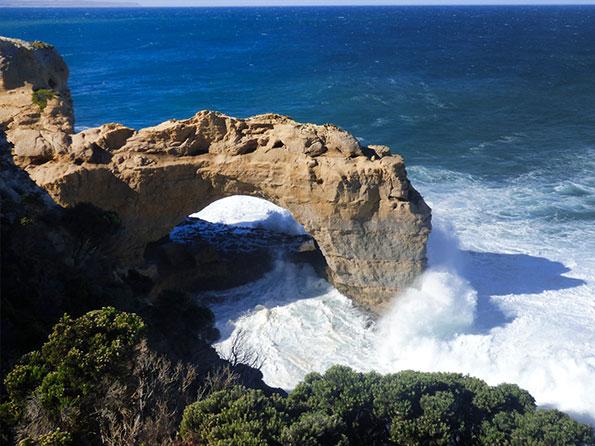 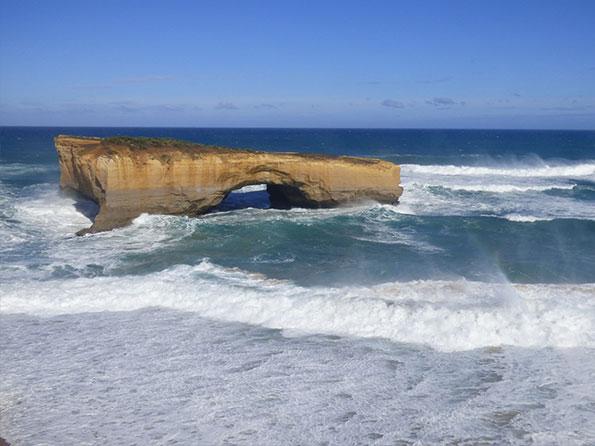 The Bay of Islands will be the last thing to see on this mesmerising coastal road trip.

From Warrnambool, you can either decide to return on the same road, or take a high way through the inland, a shorter, but less interesting option that will take you back to Melbourne in about 3 hours.