Munnar is a magical place, known for its vast tea plantations, hill stations and amazing landscapes. One would really enjoy getting stuck here. Unfortunately, we got a little bit stuck here for the wrong reasons.

The bus ride from Kumily to Munnar was five hours long and really uncomfortable. At first, we were sitting in the back and when the bus got quickly overcrowded, we knew it was going to be an unpleasant ride. The road was full of twists and turns and so bumpy that we got thrown around like rag dolls in the back of the bus. I was slowly starting to feel sick but after two hours the bus finally made a small stop and plenty of people got off so we took the chance and sat up front. The rest of the way was still hard but much more bearable since we were able to see where we were going. After about five hours we were almost there and while passing beautiful Devikulam with its tea plantations, we could already start to admire the beautiful landscape.

We got off the bus in Munnar, a pretty small city center, and walked towards Old Munnar in search of some cheap accommodation. After checking out a few places and some bargaining, we managed to find a nice place to stay. But when we entered the room I just fell on the bed. Exhausted after the rollercoaster bus ride and feeling sick as well, all I wanted to do was rest. My stomach wasn’t feeling to good, I lost my appetite and was doing my best not to throw up. I felt like this for the next two days, so we really didn’t do much during that time. Rea was taking good care of me, bringing me whatever little food I wanted to eat and nursing my head in her lap. On the third day, I was finally feeling better and able to get out of bed for lunch and dinner. But the dinner we had brought us another set of problems. 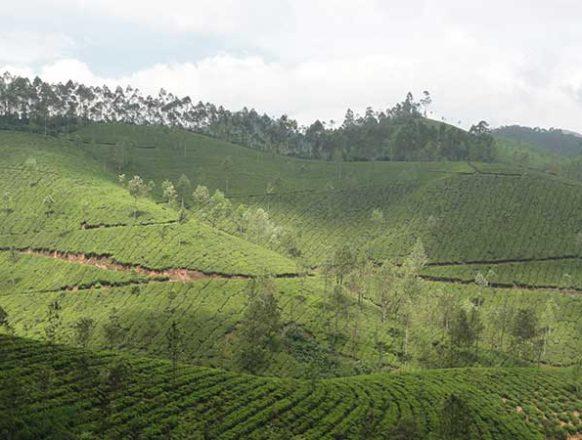 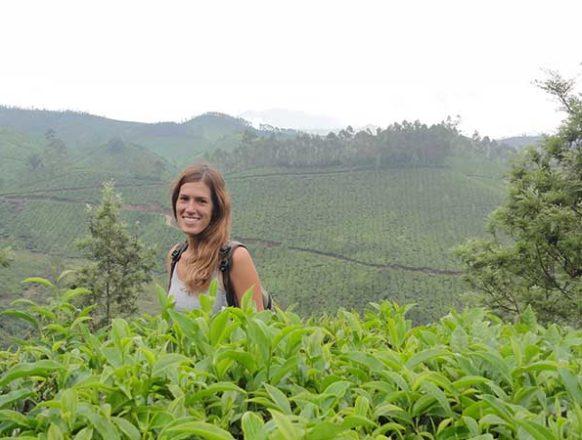 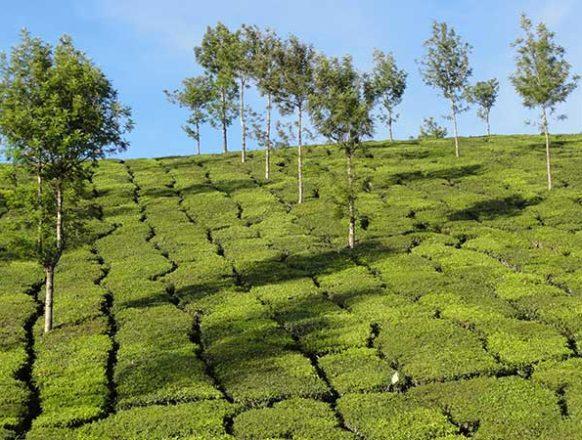 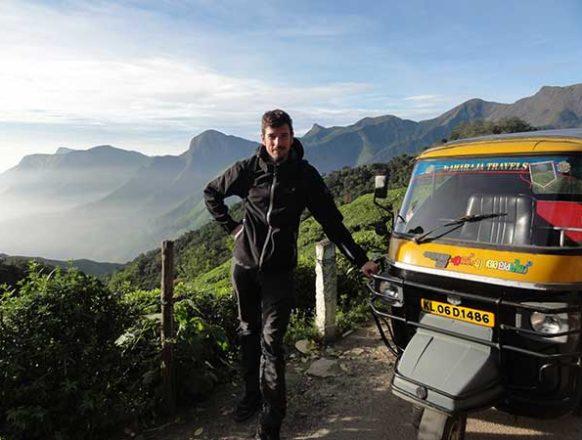 After having some weird biryani for dinner, it was Rea who got sick this time. She spent most of the evening in the toilet, getting the biryani out of her system. She was feeling sick for the next few days as well, not able to eat much since her stomach was constantly upset. Realizing Indian food doesn’t really fit with her was also a psychological blow. She was hungry and wanted to eat but couldn’t even bare the smell of curries in the restaurants. We also made a mistake of going on a shorter trek when she was feeling a bit better but that proved to be a bad idea since her stomach got upset again. She needed rest and I basically had her locked in our room for the next couple of days, feeding her nothing but plain rice, toast and bananas. After that she got much better and we were finally able to go around and do some exploring.

Even though we both got sick and spent a lot of time in our room, we did manage to see a lot in this beautiful area. We visited the TATA tea museum, where we learned a lot about tea itself, the whole process of tea making and the history of Munnar and its tea plantations. One of the biggest revelations was one of the most obvious ones. We’ve learned that black tea and green tea actually come from the same plant. The difference is in the process of drying it. They also explained the proper way of drinking tea. Drinking green tea with no added sugar, as the Chinese and Japanese do, is the right way, while drinking black tea with milk and sugar, as the British and Indians do, is the wrong one. That’s because black tea loses almost all its good qualities in process of drying, so basically all of India is doing it wrong. It’s quite a shame, with the amount of tea they have, when you think about it.

We were planning to do some hard trekking in Munnar, but given our poor health state and expensive guides, we opted not to. But we did two lovely independent treks. One was to a nearby viewpoint and some waterfalls further along the way. The road to the viewpoint was nice but the view itself was nothing spectacular since the mountains in the distance were barely visible due to the fog and clouds. From there we took a short cut down to the waterfalls. The way down was actually the best part as we were walking through the tea plantation. We were enjoying the peace and quiet, counting all the shades of green and breathing in the atmosphere of the place. There were some huge black boulders scattered around just sitting in the middle of the tea plantation and it made the surroundings look like something out of a fairy tale. The path brought us to a small village down bellow from where we went to see the waterfalls. The falls themselves were nice, but the sight of a man emptying his garbage bag straight in to the river was not what we hoped to see. Also Rea, or should I say Rea’s tummy, was feeling a bit tired at that point, so we took a rickshaw back to town.

The other independent trek we did was really good. It was a bit spontaneous as we didn’t know where exactly we where going. We walked in the direction of a nearby tea plantation, only planning to grab a sneak peek. But once we got to the footsteps of the plantation, the place was so welcoming and attractive that we kept walking deeper and deeper. Before we knew it, we were standing in the middle of nowhere. We were almost completely alone there, only meeting a few women tea-pickers on their way from work. The calmness and serenity of the place felt really positive and we were mesmerized as we watched a game of light and color between the sun and clouds on the green tea canvas. What was planed as a short walk turned out to be a day well spent getting lost in the tea plantation.

During our extended stay in Munnar we had a bit more time on our hands and got very friendly with some of the locals in the vicinity. The guesthouse owners, the rickshaw drivers waiting outside and the restaurant workers where all getting really familiar with us and we felt really accepted. We also met a friendly solo traveler from Israel by the name of Tsvi. We even arranged a rickshaw sightseeing tour to Top station together. The deal was that the rickshaw would take us to Top station, which is 35km away, wait for us there, take us back and stop on all the points of interests on the way back.

We started early, just before sunrise and it was still very cold so we were shivering a bit and still half asleep sitting in the back of the rickshaw. After about half an hour the rickshaw suddenly stopped and we were a bit confused for a moment. But then we realized why we stopped. There was a herd of elephants having breakfast on a small green grassy area just a stone throw away from us. The sight really woke us up and warmed our cold bodies. We took a few photos of the wild elephants but when they moved away towards the forest, we also got on our way to Top station. On the way up I had to tell the rickshaw driver to stop a couple of times. The sun was just coming up and we were driving through this beautiful green area of tea plantation so I had to take a few snaps with my camera. Soon we arrived to the Top station and we were blown away with the view. We were overlooking this big beautiful valley with a huge green mountain right in front of us. The sun was just piercing through the mist and lighting up the whole valley from beneath. We all took our time and we were soaking in the positive energy of this beautiful place. After a warm cup of tea we headed downwards and our next stop was at a big lake that reminded us a little bit of our Slovenian lake Bohinj. It looked similar but this one was artificial and with its big dam it provides most of the electrical power to the region. There were a few shops scattered around the lake selling souvenirs and snacks. While we were walking across the dam we came across a young group of college students posing for a photo. Half kidding, I made a snap and they got so excited that we spent the next few minutes just taking photos with them. We felt like some celebrities but it was time to move on. Our next stop was quick one as we checked out a wild beehive nest on a big tree along the road. The tree had a few swarms of bees and about a dozen nests full of delicious looking honey. It looked yummy but was out of reach so we took a few photos and moved forward to a small viewpoint overlooking a beautiful green stretch tea plantation. It was our last stop before arriving back to Munnar city center. We had lunch there and with our heads full of impressions we were happy after a day well spent.

After experiencing all the beauties of Munnar we felt like we could stay here even longer. But we lost too much time due to our health issues and it was time to move on. We got on the bus the next day and left this magical place where one could count all the shades of green forever.