Here we are, finally in Colombo, Sri Lanka, after a long, tiring, but pretty interesting trip.

We started out on 19th of October from Ljubljana to Belgrade. We were supposed to take the train at 8.30, but given some unknown situation our train had a two-hour delay, so that we arrived to Belgrade at 21.00. Anyway, a nice hostel in the center of the city was recommended to us, and we were very happy to be able to stay just the two of us in a dorm for seven people. After a nine-hour trip and a beer in the hostel, we needed a rest urgently, but guess what happened! At 1.00 a.m. the receptionist entered in the dorm with five more people who were staying at the hostel the same night. It was a “nice” surprise, indeed, especially because they left at 6.00 a.m., so we didn’t have that much of the rest.

The next day we went for a walk through the center of Belgrade, hoping to take part in the free walking tour, but unfortunately there was none else interested in the tour at that moment, so that it was suspended. But the tourist guide was extremely nice, and she recommended us a few places to visit before going to the house of our couch surfing host Dalibor who was going to be our host for the next two nights. 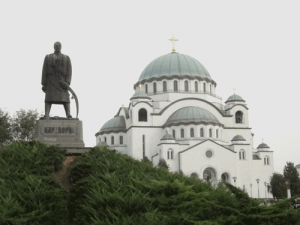 I can say that we weren’t very amazed by the capital of Serbia at first, but it is certain that if you don’ t see it by night, you’re not able to feel the real spirit of it. In the evening, Dalibor took us for a drink, and the night changed the whole perspective of the city. All that remarkable buildings which are not noticeable during the day, show their complete opposite image when they are enlightened by all kinds of colors.

The next day was more easy-going, because we were extremely tired after everything, so we just took a quick walk to the nearby Belgrade’s cathedral. In the evening had a nice conversation with Dalibor over some wine and baked polenta that we prepared. Shortly after we went to sleep, because the next day was going to be tough. 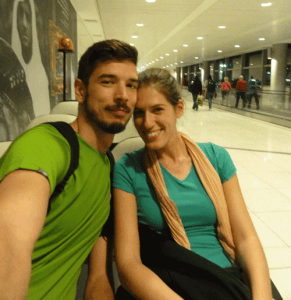 We woke up early to pack up all our stuff and went to the airport to take our five-hour flight to Abu Dhabi, and then continue to Colombo in another almost five-hour flight. We arrived in Sri Lanka early in the morning and found out that our Air-bnb reservation had been canceled because our profile wasn’t verified. It was about 5.30 a.m. (local time) when we took a bus to the center which cost us 120Rs each (around 0,70€), and decided for our back-up plan, which was a kind of hostel/motel in the center of Colombo.

Although the accommodation here in Sri Lanka should be really cheap, Colombo is much more expensive, and the motel we’re staying at is the cheapest one we could find. It costs us 20$ for both in a dorm!! No air-conditioning (obviously), no hot water, and conditions aren’t comparable with what you can get in Europe for the same price.

Anyway, we are happy to have a bed to get some rest, and a shower to refresh a bit after a one-day trip, and after that we continue with our adventure.