After our short visit to Ahmadabad we were moving further north in to the next Indian state, Rajasthan. It felt different from the start as the roads suddenly got better and the landscape changed once more. A more yellow tone was standing out and the land seemed drier as all the palm trees were suddenly gone. After getting familiar with the sight, our bus arrived to Udaipur, our first stop in Rajasthan and also the place where we celebrated the turn of the year.

Our introduction to Udaipur was fast as the rickshaw driver, who took us to the guest house from the bus station, was speeding through the narrow busy streets. We walked the same streets shortly after, admiring the abundant handmade pieces on display in the shops that were selling them. We were missing this kind of craftsmen’s objects before, but Rajasthan obviously had more to offer. An endless variety of brass, silver, wood and fabric items were up for sale and it was hard to hold Rea back from buying everything. Eventually we bought a really nice pashmina shawl for her which came in handy after and it also proved to be real pashmina, meaning it was worth the price we paid for it. 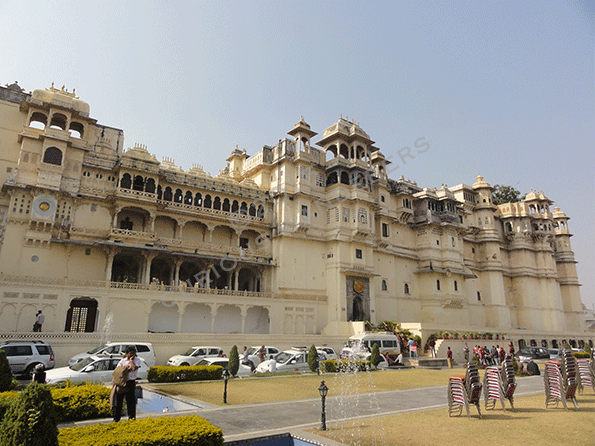 Udaipur, with its narrow, busy and bustling streets, is a city spread around a lake. There are two former palaces, turned into five star hotels, sitting on small islands in the middle of the lake, only reachable by boat and entry is not allowed without a reservation. The city is full of havelis, old, square, aerial and often four storey tall buildings; each with its own rooftop restaurant and every second one was a guest house as well. Observing and feeling the city vibe from the rooftops was fun and pleasing to the eye as every rooftop has a view over the lake. In the labyrinth of city streets an odd Hindu temple or two can be found but it’s the city palace that is the main attraction. We checked it out from the outside, circling it, but didn’t enter as the entrance fee was too high for us yet again. Instead, we opted to visit the Bagore-ki, Haveli museum and see a traditional Rajasthan dance show.

The show consisted of a number of different traditional dances. First, three women were dancing, each with a burning bowl of petroleum on her head, displaying their skill of balance and grace. Another group of women followed, this time half of their bodies were covered with different types of bells and they were dancing gracefully while hitting these bells continuously with another small bell, tight to a string, from every angle imaginable. They were doing this with a sword in their mouth and changing poses as the dance went on. Another, this time less extravagant dance and a quick Rajasthan puppet show followed before the final act. For the grand finale, a woman walked up on stage with two large water bowls on her head. She danced, showing her balance skill and even kneeled down to grab a napkin with her teeth, laid over a bouquet of flowers. Her assistant then placed three more bowls on her head and the woman was now standing on a metal plate, dancing, with five pot bowls on her head. But it didn’t stop there as she added three more bowls and was now dancing barefoot on shattered glass. As if that wasn’t impressive enough, she finished her dance with an amazing, eleven pot water bowls on her head. She got a huge round of applause and thus the traditional (circus) dance was over.

We met up with our Lithuanian friends, Olga and Vaidas, yet again and since it was New Year’s Eve we decided to celebrate it together. We went to one of the rooftop restaurants across the river where we shared a hookah and had a few drinks. They even brought a Champagne bottle, which we opened at the stroke of midnight. The fireworks were on, but sadly, just for about two minutes. It was also a bit foggy and it even started raining, practically the same time as the fireworks stopped. Still we made the most of it and had fun celebrating.

Soon we were on the move again, this time towards Jodhpur. We were headed there by bus but decided to break our trip a bit with a stop at one of the most important Jain temples in Ranakpur. 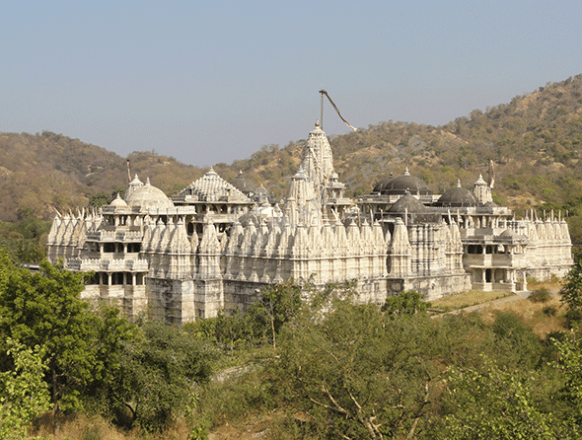 Visiting the temple was well worth the time and high entrance fee as it is one of the most beautiful temples we’ve ever seen. It’s quite big and has astonishingly beautiful carvings on its walls, ceilings, domes and 1444 pillars made from milk-white marble. It’s over 600 years old but still very well preserved. Our eyes and minds were going mad with seeing so many details and trying to realize how much time and effort was put into this gorgeous piece of art. We left Ranakpur completely amazed and we were discussing its beauty on the bus to Jodhpur. 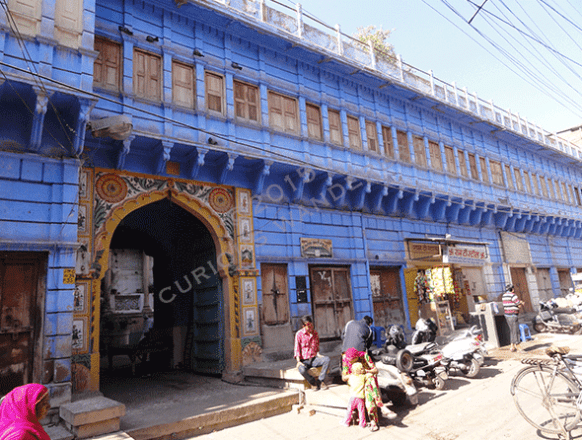 After one of the longest bus drives, we arrived in Jodhpur and our guest house at around 9pm. We slept like a rock that night and got well rested for a full day of sightseeing, which started the next morning. We took the long way, through the narrow, local and hidden streets, up to the top of the hill where the famous Mehrangarh fort lies. It’s a gigantic fort with high and thick walls, which cradle its inner beautiful buildings. Most of it is turned in to a rich museum of the Maharaja’s history and way of life inside the fort. We got a chance to see a lot of amazing and interesting things like the armoury, old hallways and courtyards, some well intact palace chambers, a crib collection, a gallery of miniature Marwar paintings and of course the wonderful view over the blue city of Jodhpur. The city itself is called blue because almost half of its buildings are painted with a sky blue colour that supposedly keeps the mosquitos away in the hot summer days. I don’t know if it works or not but it sure gives the city something special.

We spent the rest of the time in Jodhpur getting lost in the narrow blue streets, exploring the market and meeting up with our Lithuanian travel buddies. We had fun in Jodhpur, enjoying the sunshine and breathing in the blue city vibe. But we were already planning our next move, this time going west towards the desert and the golden city of Jaisalmer.

2 thoughts on “WELCOMING RAJASTHAN AND 2015”